Mexican authorities have detained two men suspected of being members of the Zeta cartel in the city of Veracruz for the disappearance of three marines, the navy announced.

The men Angela Mora and Gregoria Maldonado whose alias names are “Devil Commander and “The Baker” were detained on Thursday in a working-class neighbourhood in the Gulf Coast port city of Veracruz, the navy said in a statement on Friday.

Mora and Maldonado are believed to be part of a Zetas’ cell that killed three marines who were kidnapped on July 29.

The once-quiet city of Veracruz has seen a major escalation of drug violence as cartels wrestle for control
over the strategic gulf state.

Earlier this month, at least 35 bodies were brazenly dumped on a busy highway in Boca del Rio during peak hour traffic.

Authorities on Friday also announced that in the border state of Nuevo Leon, they have arrested one of the suspected masterminds of a casino arson that killed 52 people last month.

Lopez, 32, is believed to be one of four alleged members of the Zetas drug cartel who planned the August 25 arson of the Casino Royale in the northern city of Monterrey.

Lopez is the 11th suspect to be arrested in the case. Seven others remain at large.

Gunmen entered the Casino Royale in Monterrey on August 25, spread gasoline and set the building on fire, trapping and asphyxiating dozens in what is believed to be a case of extortion. 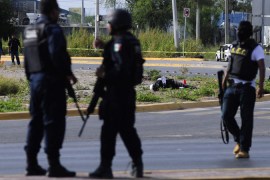 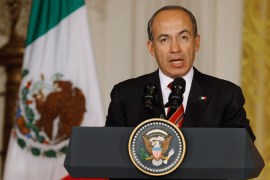 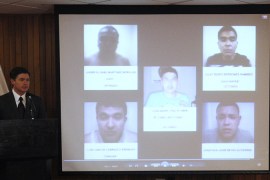 Officials say suspected members of the Zetas drug gang have confessed to involvement in arson that killed 52 people. 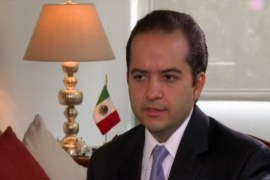 Mexico’s security spokesman discusses drug violence, saying it is “essential to bring these cartels down”.