Thousands of Kenyans joined by their president and the prime minister have attended the funeral of Wangari Maathai, Africa’s first female Nobel laureate who succumbed to ovarian cancer late last month.

President Mwai Kibaki and Raila Odinga, the prime minister, joined mourners at Uhuru Park’s Freedom Corner for Maathai’s state funeral on Saturday, eulogising the woman who earned herself the name ‘Tree Mother of Africa’ after the millions of trees planted across Kenya by her Green Belt Movement.

“Besides being a woman of great courage and tenacity, the late professor Maathai demonstrated, by example, the virtues of selfless service to the nation,” Kibaki said.

“The best way to honour her is to carry on the great work she started, especially in the fields of environmental conservation, social justice, human rights and democracy.”

“Wangari’s legacy goes beyond Kenya – all over the world,” said Odinga. “We have lost a dedicated selfless Kenyan patriot”, and her work will continue to inspire the rest of the world.

Maathai, who was elected MP in 2002 and briefly served as a junior environment minister in Kibaki’s government, died at the age of 71.

During the funeral her three children and a granddaughter planted a tree at the park which she famously fought to save from plans by the regime of Daniel arap Moi, a former president, to construct a 60-storey building.

Early on Saturday, Maathai’s bamboo-framed coffin, made out of water hyacinth and papyrus reeds and draped in the Kenyan flag, was wheeled out and placed on a hearse by Kenya Forest Service pall bearers, the Daily Nation reported.

The coffin, specially made by three artisans from the Innovation Centre in the country’s western town of Kisumu, was in fulfilment of Maathai’s final wish not to be buried in a wooden coffin, the paper added.

Al Jazeera’s Nazanine Moshiri, reporting from the capital Nairobi, said: “She was so much to many people; she was really an environmentalist to the very end. She’ll not be buried; she will be cremated.”

Reverend Phyliss Ochillo, who prayed for Maathai on Saturday, said the laureate was concerned about the environment when he visited her in hospital only a day before her death.

“She did not respond to anything but when I talked about the environment that’s when she responded,” Ochillo said.

The environmental group Green Belt Movement, which Maathai founded, also campaigned on education, nutrition and other issues important to women.

Maathai, who was also a veterinary anatomy professor, rose to international fame for campaigns against
government-backed forest clearances in Kenya in the late 1980s and 1990s.

She branded the clearances a political ploy that caused irreversible environmental damage.

The courts blocked her suits and Green Belt lawyers complained that their cases were dismissed on technical grounds or their files were mysteriously lost.

In her speech accepting the Nobel prize, Maathai said she hoped her own success would spur other women on to a more active role in the community.

“I hope it will encourage them to raise their voices and take more space for leadership,” said Maathai. 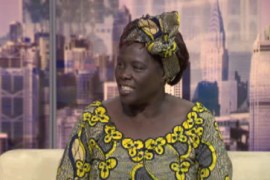 The first African woman to win the Nobel Peace Prize talks about her work. 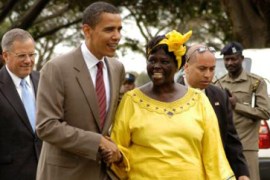 As the Green Belt Movement in Africa grew, she became known as the Tree Mother.