The Egyptian president has dismissed his government, saying he will replace it with a new one on Saturday.

“I have asked the government to resign and tomorrow there will be a new government,” Hosni Mubarak said in an address to the nation in the early hours of Saturday after four days of deadly protests.

The president said that change can not be achieved through chaos but through dialogue.

Saying he understood that the people of Egypt wanted him to address poverty, employment and democratic reform, he promised to press ahead with social, economic and political reforms.

“We will not backtrack on reforms. We will continue with new steps which will ensure the independence of the judiciary and its rulings, and more freedom for citizens,” Mubarak said.

He said new steps will be taken “to contain unemployment, raise living standards, improve services and stand by the poor”.

Reacting to the protests that have erupted in the capital and other cities, Mubarak urged calm, adding that only because of his own reforms over the years were people able to protest.

Mona El Tahawy, an Egyptian columnist and author living in the US, dismissed these comments.

“There is no political freedom in Egypt, that’s exactly why the protests happened,” she said.

“If there were political freedoms, we wouldn’t see 12,000 to 14,000 political dissidents in Hosni Mubarak’s jails.

“He spoke tonight as a man absolutely out of touch with his people … He tells them ‘I’m going to implement reform and I care about the people.’ That’s meaningless. He’s been in power for 30 years, he knows how poor people are.”

Mubarak’s speech is likely to be seen as an attempt to cling to power rather than take concrete steps to solve some of the more pressing problems facing many Egyptians, primarily unemployment and rapidly rising food prices.

Al Jazeera’s Ayman Mohyeldin, reporting from Cairo, said many Egyptians calling for change would say the sacking of the government is not enough.

“Ultimately in Egypt, the power lies with the president,” he said.

“On paper, you have an independent parliament and an independent judiciary but every Egyptian will tell you that at the end of the day, power is concentrated in the hands of the president.

“Very few institutions can challenge his authority, so the sacking of the cabinet is not going to end the grievances of the people.

“Over the past thirty years, the president has sacked many cabinets before, this time is no different. Some of these cabinet ministers that are serving, like the ministers of interior and defence, between the two of them have been serving for decades.

A sombre looking Mubarak called anti-government protests “part of a bigger plot to shake the stability and destroy legitimacy” of the political system.

He also defended the security forces’ crackdown on protesters, saying he had given them instructions that the protesters be allowed to express their views. But, he said, acts of violence and vandalism left the security forces with no choice but to react to restore order.

Even after Mubarak’s speech, protesters defied the night curfew and shouted slogans like “Down with Mubarak” in Cairo and other cities.

“We don’t care if the government resigns, we want him to resign,” Khaled, a 22-year-old demonstrator, said, in the Mediterranean port city of Alexandria. 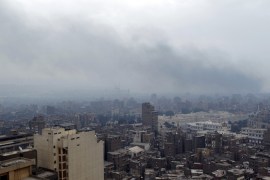 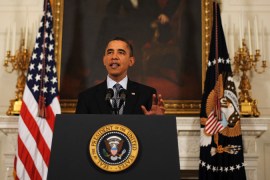 US president calls on his Egyptian counterpart to take concrete steps towards political reform. 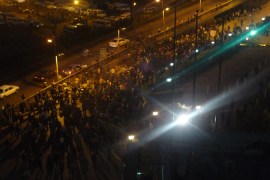 Online social networks being used by activists to communicate and organise anti-government protests.