As Egypt continues to unravel under the pressure of a popular uprising against the Hosni Mubarak government, we look at the role of its military as the guardian of sovereignty and national security.

Where is Egypt heading after days of revolt?

Clearly the way forward is not the way back.  But since President Mubarak has opted for more the same old and bankrupt ways of dealing with national uprising, making promises of change and cosmetic alteration to governance essentially, all now depends on the momentum of the popular uprising and the role of the military.

Mubarak’s attempts to delegitimise the popular revolt as isolated incidents exploited by Islamists has fallen on deaf ears at home and abroad. As the revolt continues to expand and gain momentum in major Egyptian cities and protestors demand no less than the removal of his regime, it’s now the military’s choice to allow for the change to be peaceful or violent.

So far, it has opted for merely policing the streets without confronting the demonstrators, whether this will turn into a Tiananmen scenario of tough crackdown or not, will be decided in the next few hours or days.

But Egypt is not China, and it could hardly afford such national confrontation.

But what else can the military do?

The Egyptian military could follow the Tunisian military by refusing orders to shoot at demonstrators or impose the curfew.

The military can replace Mubarak with a temporary emergency governing council or leave it for civilian opposition groups to form government in consultation with the military.

This depends on the cost and benefits of keeping Mubarak who’s long been the  military man at the helm of the regime. Appointing intelligence chief Omar Suleiman as his vice president, and hence ending his son’s chances for succession, will make little difference on the long term.

There is direct correlation between continued momentum of the uprising and the need to remove Mubarak, his family and his political leadership from the helm. Also, the military will make its calculation on the basis of delicate balancing act that insures its own influence and privileges while not allowing the country to descend into chaos.

And as the ultimate guaranteur of the national security, the Egyptian military must also take regional and international factors in consideration, notably the United States.

Will the Chief of Staff of the Egyptian military play a new role for the United States?

The Obama administration has probably put the Egyptian military chief of staff, Lt. Gen. Sami Hafez Anan, on notice before he left the US capital on Friday, and explained what it can, could not or would not stand for in terms of the military’s response to the revolt.

Washington has been a major backer of the Egyptian military over the last three decades, supplying the country with around $2bn in annual aid mostly for military purposes. When the uprising broke out, Anan was in Washington as part of their annual strategising sessions.

Clearly caught by surprise, the US has been a mere spectator over the last several weeks, as people took to the streets in Tunisia or Egypt.

The Obama administration continued its predecessor’s policy of nurturing contacts and consultation with various Egyptian opposition groups in addition to the military.

It understands all too well that the response of the Egyptian military will have far reaching influence, not only on the situation in Egypt, but also on other countries in the region, no less on its future relationship with Israel.

For the military to be the guardian of the state’s sovereignty and stalbility, it must  be the protector of Egypt’s future politics, not its permamnent leader. 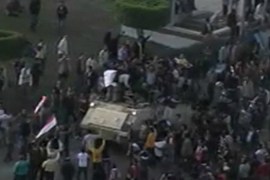 At least three people killed as protesters attempt to storm the interior ministry in Cairo. 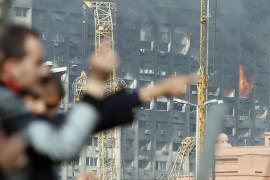 Egypt’s stock exchange and its banks will be closed on Sunday, a move analysts say could rattle investors. 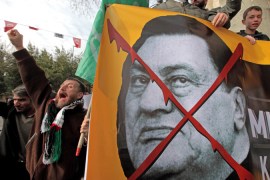 President Mubarak expected to appoint new prime minister as he struggles to contain anger against his rule.