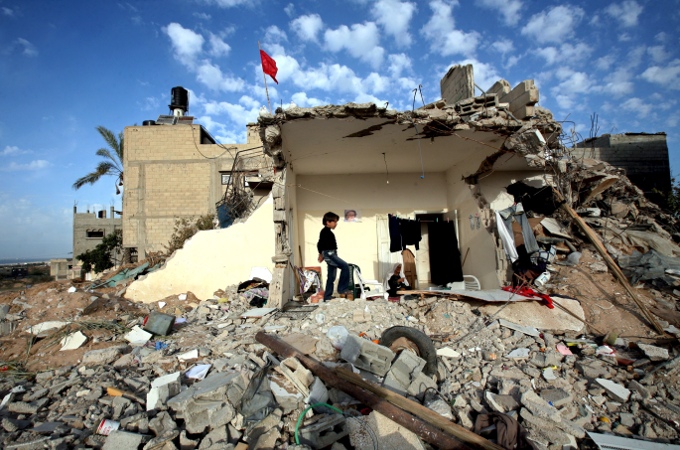 Did the Palestinian Authority (PA)’s leadership have foreknowledge of the Gaza war? That question is raised – though never satisfactorily answered – by several exchanges revealed in The Palestine Papers.

In defending their handling of the Gaza war, Mahmoud Abbas, the PA president, has long held that the PA warned Hamas – both in Gaza and through its Syrian-based leadership – that Israel was planning an attack on Gaza.

The PA always maintained that their information was only based on Israeli press reports; however, minutes of meetings between the PA and Israeli leaders tell a different story.

The Palestine Papers show that Saeb Erekat, the chief Palestinian Authority negotiator, told George Mitchell, the US Middle East envoy, in a meeting on October 21, 2009 that Amos Gilad, the director of Israeli military intelligence, alerted Abbas prior to the Gaza attack.

Erekat: […] Our trust with the [Israeli] government is zero. Amos [Gilad] spoke to Lieberman [the Israeli foreign minister] – told them about the claim that Abu Mazen [Abbas] was colluding with them in the Gaza war. He went to Abu Mazen before the attack and asked him. Abu Mazen replied that he will not go to Gaza on an Israeli tank. Amos Gilad testified about that. He was honest. So we can maintain the channel.

The Palestine Papers confirm here what was previously revealed by second hand sources that were quoted in some of the thousands of US State Department cables published by WikiLeaks in December last year.

Among the diplomatic cables is a report from June 2009 on a conversation between Bob Casey, a US senator, Gary Ackerman, a US representative, and Ehud Barak, the Israeli defence minister.

In the report, the US officials said that Barak explained, that the “GOI [Government Of Israel] had consulted with Egypt and Fatah prior to the Gaza war, asking if they were willing to assume control of Gaza once Israel defeated Hamas.

“Not surprisingly, Barak said, the GOI received negative answers from both,” the document states.

Confronted with these leaks, Erekat disputed Barak’s account. “We knew about the war because the Israelis were saying there was going to be a war,” Erekat told The Associated Press news agency. But “there were never any actual consultations between us and the Israelis before the war,” Erekat maintained.

The Palestine Papers show, however, that Gilad, who continues to serve the Israeli government as an adviser to Barak, held several conversations with PA negotiators on the situation in Gaza prior to the war.

In a post-Annapolis negotiation on March 31, 2008 with Ahmed Qurei, the former PA prime minister, Gilad and Tzipi Livni, the then-foreign minister, foreshadowed a tragedy in the making.

Livni: Israel does not want Hamas. We cannot accept to have an Islamic regime on our borders. This contradicts our strategic vision.

Gilad: My personal opinion, and I do not represent the government in this, is that sooner or later we will collide withy Hamas because they, are like Hezbollah, continue to build their military capacities. We will clash with them but we will not stay in the Gaza Strip.

Livni: The last sentence represents the position of the government.

Qurei: You said that Israel is not negotiating with Hamas, but how do you see Hamas if the situation continues as it is now?

Gilad: The West Bank is coming and this is Hamas’ strategic goal. We are not negotiating with them but we allow the entry of food and fuel into the Gaza Strip for humanitarian reasons. My strategic advice for you is to be ready. It is like Achilles’ heel; if the situation goes on as it is for a year or two more, you will become weaker and Hamas will have control over the West Bank. They in Hamas understand the situation and they are fearful. Gaza was only an example. They understand the mood in Israel.

After the war, Abbas and Erekat maintained that all the information on the Israeli attack came from the media and that the attack was not discussed with the Israelis prior to the war.

“We don’t discuss these things, no,” Erekat told Al Jazeera in an interview in November 2010.

“There were plans, maps, charts published in the Israeli press and Abu Mazen met with Olmert and Olmert raised the issue of missiles from Gaza and so on, and nobody told him,” Erekat said in the interview.

Some 1400 Palestinians were killed in Israel’s three week long assault on the Gaza Strip. Many of the victims were women and children.

The Palestine Papers also show a recurring theme as to what extent the PA collaborated with Israel in its attempt to defeat Hamas and other armed Palestinian groups.

In that same series of October 2009 meetings, Erakat recounted to Mitchell his disagreements with Israel – as well as the Egyptian Government – on Gaza policy. Erakat appeared frustrated that not enough was being done to maintain the siege on the Gaza Strip.

Erekat: […] I told Amos Gilad: “You are Egypt’s man. You know the Egyptians. 11km! [Referring to the length of the Egyptian border with Gaza]. What’s going on with you and the US, the $23 million [given by the US Agency for International Development to prevent tunnels] and ditches – its business as usual in the tunnels – the Hamas economy […].”