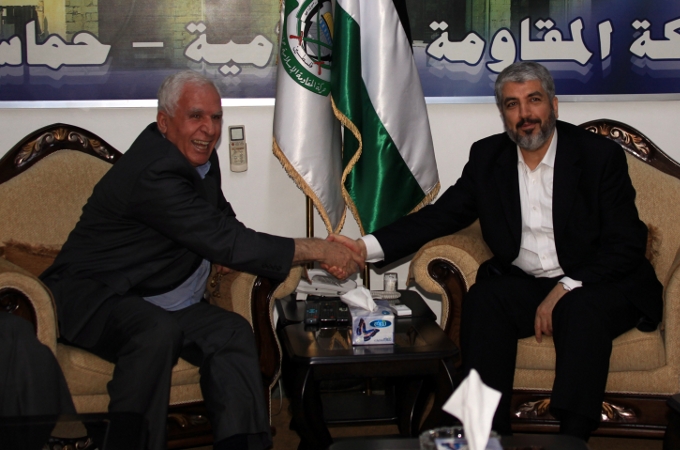 Despite years of Egyptian-mediated talks, Hamas and Fatah have failed to reach a reconciliation deal [EPA]

Many may still ask about the prospects for national reconciliation; the publication of The Palestine Papers, however, starkly illuminates how this has become plainly impossible.

The Palestine Papers show that – for the leadership in Ramallah, at least – simply there is no going back. This is no ‘family quarrel’ which a few well-chosen, soothing words will wipe away. Mahmoud Abbas changed sides, and identified himself unreservedly with Israel in a ‘full-spectrum’ war against Hamas and Islamic Jihad. Abbas’ changed allegiance is reflected in the exchange between Abbas and prime minister Ariel Sharon at the latter’s Jerusalem residence in June 2005.

Abbas noted “with pleasure, that Sharon considered him a friend, and that he too considered Sharon a friend… adding that Palestinians want peace, and hence, every bullet that is aimed in the direction of Israel, is a bullet aimed at the Palestinians as well. It is neither in the Palestinian interest, nor in the Israeli interest, to persist with violence.”

In making this key switch, Abbas’ colleagues became ‘more holy than the Pope’, with Saeb Erekat, the PLO chief negotiator, telling virtually every European and American they met, that ‘Ahmadinejad is in Gaza and Lebanon’, and that in the fight against (Iranian) Hamas, they (the forces of Abbas) are more committed than even Israel. Erekat paints the region to American interlocutors as one slipping away, as though sand through the US fingers, to Iran, Hamas, Hezbollah and al-Qaeda, with Abbas and Erekat standing as the fragile bulwark against its final takeover.

If national ‘reconciliation’ required only that Palestinians should ‘walk-back’ over-heated rhetoric, perhaps some form of national ‘modus vivendi’ might just be possible; but what The Palestine Papers reveal is how these sentiments did not remain as mere sentiments, but became the basis to a systematic re-engineering of every Palestinian institution – and mosque – to orient it against fellow Palestinians who dissented – and to repress all types of future opposition.

“They are torturing people”

To satisfy this objective, the Palestinian Authority has, according to its own records, killed its own people (both independently and with Israeli forces), arrested thousands of people, tortured suspected Hamas supporters, and suppressed religious activity.

The Palestine Papers show that the so-called mission of “establishing rule of law” has become a mere codeword for suppressing Hamas, the Islamist organization that won elections in 2006. From 2001 until present, the Palestinian security forces went from being accused by Israel and the West of complicity in terrorism against Israel, to terrorizing their own society. This was clearly reflected in a conversation between U.S. Security Coordinator Lt. General Keith Dayton (USA), and Saeb Erekat on June 24, 2009.

Dayton: “By the way, the intelligence guys are good. The Israelis like them. They say they are giving as much as they are taking from them – but they are causing some problems for international donors because they are torturing people”.

The Palestinian Authority laid out the extent of its cooperation with Israel in a confidential memo they gave Senator George Mitchell in June 2009. Among the actions they highlighted:

In an article published recently in Foreign Policy, Aisling Byrne has shown how the American and European security project devoured all aspects of normal life: Palestinian civil institutions were emptied of all Hamas affiliated employees – however distant the relation – and were shaped to the objective of sustaining a Palestinian élite, on which Washington could rely to collaborate fully with Israel.

Security apparati were lavishly founded and equipped as extensions of the Israeli security services: its members vetted, and approved, solely on the basis of their personal hostility towards Hamas. Abbas and the West were engaged in building a new ‘police state’ – as one western diplomat ruefully noted, during an interview with the Financial Times, when questioned about the torture practiced by the Palestinian security apparatus.

Economic aid was directed – not so much at ensuring the long term economic development of Palestinians – but rather, at creating a popular dependency and vulnerability that served to contain public dissent. The ‘sons of the Abu’, the emerging economic oligarchs – facilitated by Europe and the US – have thus enabled Washington to stitch together close commercial collaboration with Israel, as well as to mesh it to wider security objectives. This reflects long-established US counter-insurgency methodology, whereby the security ‘strongmen’ evolve into commercial oligarchs.

Aid was coopted to buy public acquiescence to a project intended to convey West Bankers into a more commodious form of occupation, but ‘occupation’ nonetheless – a remotely operated occupation, to be sure, whose more visible aspects would be tidied out of sight – and which would no longer rub salt onto the sores of the Palestinians.

And here, finally, we arrive at the key reasons why reconciliation between this Fatah leadership and Hamas is not possible: Firstly, it is impossible because the enmity towards Hamas has been so systemized, so ‘built-in’ to every aspect of life, and to every institution, that it would require the dismantling of everything that was built by Abbas and the Americans during the last decade, to make ‘reconciliation’ mean something more than empty words.

But secondly, it will not happen because simply – as the Palestine Papers so starkly reveal – there was nothing on offer. Netanyahu and Livni offered Abbas nothing. In short, what is there to talk about with Hamas? Abbas had nothing to give.

When Hamas first contemplated Oslo, they concluded that it had aspects which seemed to them to be a reflection of classic US counter insurgency practice, borrowed from Viet Nam. At this point, Hamas took the decision to protect the Palestinian option of resistance. It was not easy in Gaza especially in the aftermath of the PLO return from Tunis; but they believed they had succeeded in keeping the option open to the Palestinian people, as one senior Hamas leader explained to me. “We believe we have kept the option in West Bank, too – although that has not been easy either”.

Hamas’ main focus, now, is the mobilization of the Palestinian ‘nation’. They mean, by this, to mobilize Palestinians inside Palestine; to mobilise Palestinians living outside – in the diaspora, and to include refugees. The revival and reform of pan-Palestinian national leadership institutions is seen as the only means of recovering any bargaining power.