The Palestinian Authority (PA) had pleaded with the Israeli government to re-occupy the Philadelphi corridor on the Gaza-Egypt border, in order to tighten the siege on Hamas-run Gaza, The Palestine Papers show.

Israel seized control of the Philadelphi corridor after the Israeli-Egyptian peace treaty of 1979 and evacuated the narrow route in September 2005 as part of Israel’s unilateral Gaza Disengagement plan.

Israel used the 14km-long corridor as a buffer zone – controlled and patrolled by Israeli forces – to prevent the movement of illegal materials and people between Egypt and the Gaza Strip. 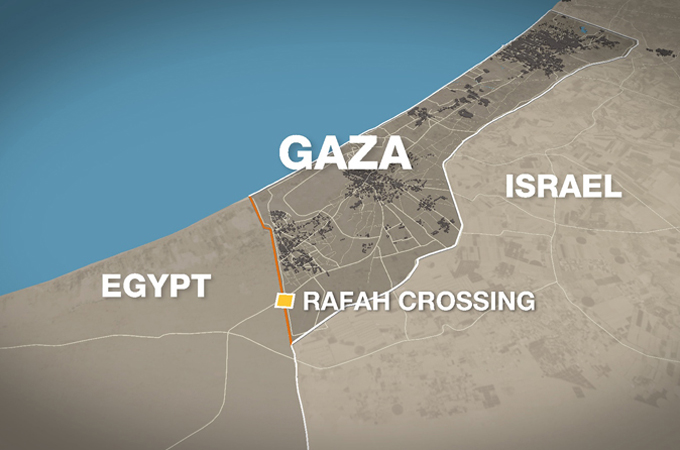 Since the Hamas takeover of Gaza in 2007 the Philadelphi route has been controlled by Hamas. After the Israeli-Egyptian siege on Gaza was put in place in June that year, a massive smuggling industry developed through the tunnels that were dug under the Philadelphi corridor in and near the border town of Rafah.

On January 23, 2008, masked gunmen demolished the steel wall alongside the Philadelphi route in Rafah and hundreds of thousands Gazans entered Egypt to buy food and supplies.

Less than two weeks later, in a meeting in West Jerusalem, Ahmed Qurei, the former Palestinian Authority prime minister, asked Tzipi Livni, the former Israeli foreign minister, if Israel could re-occupy the Philadephi corridor to seal the border and cut off supplies to Hamas.

Livni: We’ll not give legitimacy to Hamas and we’ll stop the smuggling of money and arms from Egypt. Did the opening of the borders appear to be a victory of Hamas?”

Qurei: Yes, they appeared to have ended the siege.

Livni: The Egyptians don’t do enough, and we’re sure they can do much more.

Qurei: What can you do about the Philadelphi Crossing?

Livni: We’re not there.

Qurei: You’ve re-occupied the West Bank, and you can occupy the crossing if you want.

Livni: We can re-occupy the Gaza Strip. What is your position?

Later that month, during another meeting on the issue of security, Livni seemed willing to retake control of the corridor after Israel and the PA would reach a peace agreement.

Qurei: Palestine will be independent but can co-ordinate. Agreement should reflect that with a commitment to security. Therefore regarding parameters I believe security is part of regional vision. Other neighbours don’t have a problem — regional security is interconnected.

A recurring theme throughout The Palestine Papers is the PA’s collusion with Israel to keep the pressure on Hamas.

Even before the takeover in 2007, the PA was desperately trying to keep control over the Gaza Strip by pleading for more weapons from the US, as is reflected in a meeting between Saeb Erekat, the chief PA negotiator, and Keith Dayton, the then-US security co-ordinator for Israel and the PA in May 2006:

Erekat: The PG [Presidential Guard] is in dire need of guns and ammunition. Particularly with the situation in Gaza, this issue is critical. [Keith Dayton replied that he will raise this point with Israelis particularly in meeting with Ephraim, (Israeli deputy defence minister) tomorrow]. We need to re-establish security liaison with Israel. This is the best way to maintain security.

After the Hamas takeover in 2007, the fighting capabilities of the movement in the West Bank were crushed. The PA then started to crack down on the civilian infrastructure of the movement, as is shown in a meeting between Yoav Mordechai, the the head of the Civil Administration in the Occupied Territories, and Hazem Atallah, the PA police chief in the West Bank, in May 2008 in Tel Aviv.

In one of the most candid examples of the PA’s bid to tighten the noose around the Gaza Strip in order to punish Hamas, Erekat shows his disagreements with Israel and Egypt on their Gaza policy. In a meeting with George Mitchell, the US Middle East envoy in October 2009, Erekat appears frustrated that not enough was being done to maintain the siege on Gaza:

Erekat: Senator, I am just briefing you on my meetings with the Israelis. I am not giving you a message. They were good meetings. I told Amos Gilad [Israel’s chief negotiator]: you are Egypt’s man. You know the Egyptians. 11km! [Referring to the length of the border with Gaza]. What’s going on with you and the US, the $23 million [given by the US Agency for International Development to prevent tunnels] and ditches – its business as usual in the tunnels – the Hamas economy…Amos Gilad started laughing!

Mitchell: What did he say?

Erekat: They don’t want to say anything negative about Egypt. It’s their strategic relation with them. But they make me pay the price. I am no longer there. I am not alone responsible for the coup d’etat in Gaza.