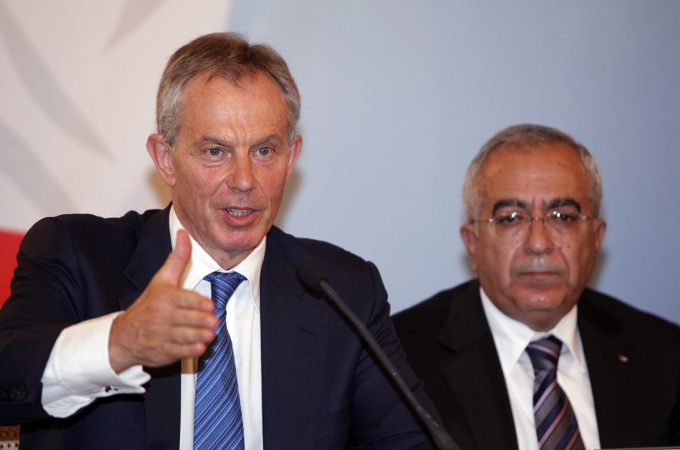 Many have questioned why the European Union failed to provide an independent view to that of the United States on Middle East policy during the last decade. It is not a simple question to answer. Partly the EU failed to assert its voice because, at the beginning of the decade, it was scrambling to contain the impact of inflating US hubris, fuelled by the defeat of Saddam Hussein. Partly it was also a simple reflection of most European politicians’ dependency on Washington. But the release of The Palestine Papers provides another answer.

They show how Tony Blair in particular had so undercut the political space, that there was effectively no room for it. In a secret policy switch in 2003, he tied the UK and EU security policy into a major American counter-insurgency (COIN) ‘surge’ in Palestine.

It was an initiative that would bear a heavy political cost for the EU in 2006, and for years to come, when Hamas won parliamentary elections by a large majority. The EU’s claims for democracy have rung hollow ever since. Blair’s ‘surge’ also left the EU exposed as hypocrites: On a political level, for example, the EU might talk about its policy of fostering reconciliation between Palestinian factions, but at the security plane, and in other ways, the EU was pursuing the polar opposite objectives.

In 2003, US efforts to marginalize President Arafat by leeching away his presidential powers into the embrace of Prime Minister Mahmoud Abbas, collapsed. Arafat dismissed Abbas as PM. This was a blow to the US policy which – even then – was focused on creating a ‘de-Fatah-ised’ Palestinian Authority. Bush complained to Blair bitterly about Abbas’ dismissal: the Europeans still were ‘dancing around Arafat’ – leaving the US to ‘do the heavy lifting’ with the Israelis. Europeans were not pulling their weight in the ‘war on terror’, Bush concluded.

From state-building to security

Blair’s COIN surge was his response to Bush: The Palestine Papers reveal ‘a security drive’ with the objective of “degrading the capabilities of the rejectionists: Hamas, PIJ [Palestinian Islamic Jihad], and the Al Aqsa Brigades – through the disruption of their leaderships’ communications and command and control capabilities; the detention of key middle-ranking officers; and the confiscation of their arsenals and financial resources held within the Occupied Territories. US and – informally – UK monitors would report both to Israel and to the Quartet. We could also explore the temporary internment of leading Hamas and PIJ figures”.

The Palestine Papers too show how the project ballooned: a huge investment in training and infrastructure of the security services; building of prisons to accommodate the possible introduction of internment for Hamas members, the establishment of the Dayton military battalions to confront Hamas, the planning to depose Hamas in Gaza, the targeted assignation of Hamas leaders: Even the international Quartet was engaged to work with Arab states’ intelligence services in order to disrupt Hamas’ sources of financing. The ‘surge’ sucked in everything: Aid, economic assistance, institution-building – all were re-oriented towards the counter-insurgency project. Ultimately the Palestinian state-building project, and the COIN surge, were to become one.

Against this counter-insurgency background, it is not surprising that Hamas’ victory in the 2006 polls only prompted a further increase in European ‘off-balance sheet’ assistance to the EU/US-made security sector. At a political level, the Europeans were attempting to keep an independent voice, The Palestine Papers show, when EU envoy Marc Otte spoke with Saeb Erekat two months after the Hamas election:

Otte: EU has to deal with the reality of a Hamas-led government… In this respect, EU position is different from the US.

Erekat: How is this position different?

Otte: US wants to see a Hamas government fail. The EU will encourage Hamas to change and will try to make things work as much as possible.

Inevitably, the EU’s actions spoke louder than Otte’s words. The EU had endorsed the Quartet conditions for engagement with Hamas – conditions which the UN representative at the time told the UN Secretary General were hurdles raised precisely in order to prevent Hamas from meeting them, rather than as guidelines intended to open the path for diplomatic solutions. Soon after, British and American intelligence services were preparing a ‘soft’ coup to remove Hamas from power in Gaza.

This catalogue of attempts to reconcile an internal policy schizophrenia has pre-empted the EU from mounting any effective foreign policy alternative to that of the US on the ‘peace process’, and has eaten away its standing in the region. The legacy of Mr Blair’s 2003 surge has been a highly costly one, as The Palestine Papers well illustrate.

Alastair Crooke is the founder of Conflicts Forum, an international movement which engages with Islamist movements broadly. He is the organiser of US and European unofficial dialogues in 2005 with Hezbollah, Hamas and other Islamist movements, and a former special Middle East adviser to European Union high representative Javier Solana. He facilitated various Israeli-Palestinian ceasefires during 2001-2003, and was instrumental in the negotiations leading to the ending of the siege of the Church of Nativity in Bethlehem. He is a former member of Britain’s MI-6 intelligence service.