Albania’s main opposition politician has threatened to hold more protests while calling on the international community to mediate in the country’s political crisis.

Edi Rama, the Socialist leader, made the comments just days after three people were shot dead and more than 150 protesters, police and national guardsmen were injured in clashes outside a main government building in the capital, Tirana.

Rama was pessimistic on Monday that a compromise could be reached without external mediation.

He claimed the protesters did not start the violence on Friday, saying that none of the demonstrators had guns and all the fire was coming from the prime minister’s building or courtyards.

The opposition called for the resignation of Sali Berisha’s government, in power since bitterly contested elections in June 2009, which it accuses of deeply rooted corruption.

The allegations follow the resignation this month of Berisha’s deputy prime minister, over claims he tried to influence a public tender for a hydro power plant.

Berisha himself denied there was any wrongdoing, and refused to resign.

“This country is not a functioning democracy and it is risking hard not because of the opposition but because of having less and less space for everybody that do not and cannot obey the rule of the regime,” Rama said.

“This is a completely different thing from the rule of law.”

Rama said that Berisha’s government was hindering the country’s progress towards the European Union and undermining its progress.

Western diplomats, including the US ambassador, have met Berisha, Rama, and the president, Bamir Topi, urging all parties to find a compromise that would diffuse political tension.

But in a further escalation, both the opposition and Berisha’s governing Democrats called for new rallies on Friday and Saturday.

Albania, one of Europe’s poorest countries, was ruled for about half a century by xenophobic Communists who banned contact with the outside world until 1990.

It is now a NATO member and seeks to join the 27-nation European Union.

Albania is to hold local elections on May 8 this year, which Rama said could not be free and fair.

They boycotted parliament, held street protests and a hunger strike but could not persuade the Democrats to investigate the electoral result.

The tiny Balkan country of 3.2 million suffers from still-weak administration and widespread corruption.

Squabbling politicians have often plunged Albania into chaos similar to the widespread riots in 1997, when Berisha was president, that followed the collapse of popular but fraudulent investment schemes. 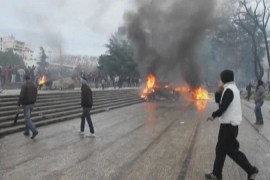 Anti-government demonstrations in the capital Tirana turn violent, resulting in deaths of at least three people. 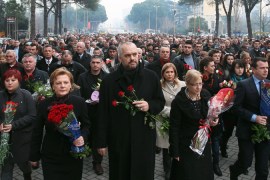 Government and opposition hold each other responsible for deaths of protesters during anti-government demonstration.