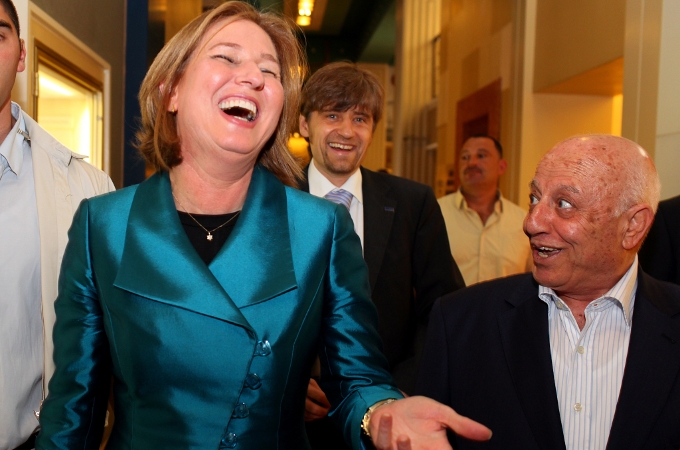 Tzipi Livni, Israel’s main opposition leader, has sought in recent months to position herself and her Kadima party as the voice of moderation in Israeli politics – the “pro-peace” alternative to the country’s current hard-right governing coalition.

She frequently accuses Binyamin Netanyahu, the Israeli prime minister, of choosing short-term political expediency over a peace agreement with the Palestinian Authority (PA).

“When Netanyahu needs to choose between a coalition and peace, he prefers his political survival,” she said in a December interview with Israel’s Army Radio. “There is a political majority, a national consensus and a public majority for a [peace] agreement and Netanyahu’s political decision indicates his intentions.”

The PA embraces this view of Kadima as a “partner for peace”. Negotiators frequently express concern over how their actions might affect Kadima’s standing in Israel’s domestic politics. One senior PA official even says he would vote for Livni if he had the chance – a striking sentiment, even if intended as a joke.

However, the Palestine Papers reveal that Kadima’s leadership took an extremely hard line during negotiations, refusing to compromise on even the most basic issues. Livni endorsed the transfer of Israeli Arab villages into a Palestinian state, the same plan endorsed by Avigdor Lieberman, Israel’s current right-wing foreign minister. She refused any right of return for Palestinian refugees. And she dismissed Palestinian concerns about the territorial integrity of their future state.

Kadima’s actions, in other words – particularly Livni’s – offer little evidence to support the popular view of the party as a more flexible partner for the “peace process”.

“We will not agree”

Several of Livni’s positions have been documented in Al Jazeera’s other coverage of The Palestine Papers. There is her belief that tens of thousands of Israeli Arabs should be “transferred” to a future Palestinian state, an act intended to preserve the “Jewishness” of the state of Israel.

Why is there no Palestinian state? Because the Israeli government’s true objective is not a Jewish state, but a Zionist one.

Or there is her uncompromising view on whether a future Palestinian state should be demilitarised.

On refugees, Livni’s position is dismissive: She flatly tells Palestinian negotiators that the state of Israel will not help Palestinian refugees, and that they should instead hope for charity “from [Microsoft founder Bill] Gates and his like”. And she rejected any right of return, telling Ahmed Qurei, a former Palestinian prime minister, in June 2008 that “we will not agree to 194”, the United Nations resolution that sought to preserve a right of return for those Palestinians expelled in 1948.

Livni: The basis for the creation of the state of Israelis that it was created for the Jewish people. Your state will be the answer to all Palestinians including refugees. Putting an end to claims means fulfilling national rights for all.

Livni similarly refuses to budge on settlements, and on Palestinian concerns about territorial integrity. The Israeli and Palestinian governments agreed in the 1993 Oslo Accords to establish a “safe passage”, a corridor between the Gaza Strip and the West Bank. But in a February 18, 2008 meeting, Livni treats the safe passage as a concession, and argues that the Israeli government is not responsible for ensuring the viability of a future Palestinian state.

Livni: A viable state is an internal matter.

Qurei: I am not talking about economic viability but about a land in which I will establish my state.

Livni: Settlement blocs will not affect the viability of the state.

And then there is the occasional eyebrow-raising (though perhaps tongue-in-cheek) one-liner. Asked by Qurei what she wants from the Jordanians, she replies, “a Palestinian state”, then quickly insists she didn’t mean it. She tells [PA chief negotiator Saeb] Erekat about a Hebrew saying: “When you want to curse somebody, you tell [them] ‘go to hell,’ but we shorten it and say, ‘go to Gaza’”.

Erekat offers to stump for Livni

Yet the Palestinian Authority insists on treating Kadima as an ally.

The minutes from several meetings in 2008 and 2009 show Erekat scheming to boost the party’s electoral popularity. In July 2008, Qurei reassures Livni that the PA doesn’t want to hurt her political fortunes by pushing too hard for 1967 borders. “We don’t want to affect your campaign, for you or for others,” he said.

And a December 2008 meeting in Washington includes what seems to be a lengthy discussion of “internal party dynamics in Israel”. Erekat at one point offered to appear at public events alongside Livni in other to “demonstrate we have something since Annapolis” – and thus to strengthen her party’s position.

The PA’s efforts were ultimately in vain: Kadima won the most seats in Israel’s February 2009 parliamentary election, but failed to form a coalition, and was eventually forced into the opposition.

So several Palestinian negotiators took their case to Washington, where they asked the Obama administration to strengthen Livni’s party. In several October 2009 meetings, Erekat frets that the administration’s efforts to push forward the “peace process” – already showing signs of futility – would “doom even Sharon’s line; you will kill Livni”.

“Why not get rid of Lieberman and bring in Livni?” he asked at the US state department on October 20. “You are giving him the crown over the Middle East”.

In July 2009, Maen Areikat, a senior official at the PLO’s negotiations affairs department in Ramallah and now the PLO representative in the US, briefed the NSU (PA’s Negotiations Support Unit) on a visit to Washington. He expressed hope that the Obama administration would pressure Netanyahu to change his coalition.

This wasn’t a universal view within the PA: Hala Rashed, another NSU staffer, said in a June 2009 meeting that “I do not see a big difference between Kadima and [Netanyahu]”. But The Palestine Papers suggest that most Palestinian negotiators are strongly supportive of Livni and Kadima – perhaps none more so than Qurei, who told Livni in June 2008: