The Palestinian Authority proposed an unprecedented land swap to the Israeli government, offering to annex virtually all of the illegal Israeli settlements in East Jerusalem. 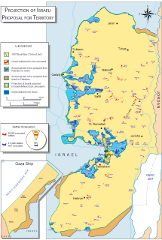 Not only did the Israeli government offer no concessions in return, but – as The Palestine Papers now reveal – it responded with an even more aggressive land swap: Israeli prime minister Ehud Olmert wanted to annex more than 10% of the West Bank (including the major settlements in Ma’ale Adumim, Ariel and elsewhere), in exchange for sparsely-populated farmland along the Gaza Strip and the West Bank.

The Israeli offer is documented in a Palestinian rendition of what’s colloquially called “the napkin map,” a rendering of which is revealed for the first time in The Palestine Papers.

Olmert met in mid-2008 with Mahmoud Abbas and showed him a map of the proposed swaps. Abbas was not allowed to keep a copy of the map, and so the 73-year-old Palestinian president had to sketch a copy by hand on a napkin.

Saeb Erekat, the chief Palestinian negotiator, described the Olmert-Abbas meeting in an interview with Al Jazeera earlier this year.

The Palestine Papers include two renditions of the napkin map, one showing Israel’s proposed swaps in the Jerusalem area, another showing all of Israel, the West Bank and Gaza. Israel would keep all of its major West Bank settlements – Ma’ale Adumim, Ariel, Kedumim and others – none of which were included in the Palestinian offers.

Olmert also proposed a “safe passage” – a territorial link between the West Bank and Gaza – that would be under Palestinian control yet remain under Israeli sovereignty. A special road would connect Bethlehem with Ramallah, bypassing East Jerusalem.

Olmert also proposed delaying any decision on the Haram al-Sharif: the issue would be negotiated between Israel and Palestine, and those talks would be overseen by a committee of the United States, Saudi Arabia, Jordan and Egypt. 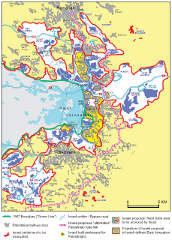 The two leaders met again on September 16, 2008. A set of talking points prepared by the NSU included a great deal of confusion about Olmert’s offer; the memo urged Abbas to ask for a copy of the map, and raised a number of questions about the territory swaps.

How do you see it addressing our interests, especially as Ariel, Maale Adumim, Givat Zeev, Har Homa and Efrat clearly prejudice contiguity, water aquifers, and the viability of Palestine?

How do you see the specific areas that you suggested to swap from Israel to Palestine addressing our interest of swapping territory equal in size and value?

The NSU memo did not explicitly endorse or reject the Olmert offer; it did warn that continued settlement growth (particularly in East Jerusalem) would make any agreement “much more difficult.”