Ramat Shlomo, Israel – For all the international controversy over construction at this quiet settlement in north Jerusalem, there is little of it in evidence.

The controversy came last year, when the Jerusalem municipality approved 1,600 new housing tenders while Joe Biden, the US vice-president, was visiting Israel. But construction has yet to begin, and residents of this settlement – populated mostly by Orthodox Jews, a group with one of the highest birth rates in Israel – say politics are interfering with family life.

“It shouldn’t be a question of politics,” said Avraham Goldstein, a student waiting at a bus stop in the settlement. “People need to build, they want to have their families nearby. There are more than 18,000 people here. And Ramat Shlomo is obviously part of Jerusalem.”

The US responded to the Ramat Shlomo announcement with anger; Biden said it “undermines the kind of trust we need” to restart talks between Israel and the Palestinian Authority (PA).

But The Palestine Papers reveal that Israel had no reason to halt construction in Ramat Shlomo. That’s because Palestinian negotiators agreed in 2008 to allow Israel to annex this settlement, along with almost every other bit of illegal construction in the Jerusalem area – an historic concession for which they received nothing in return.

“We proposed that Israel annexes all settlements”

Qurei: This last proposition could help in the swap process. We proposed that Israel annexes all settlements in Jerusalem except Jabal Abu Ghneim (Har Homa). This is the first time in history that we make such a proposition; we refused to do so in Camp David.

Erekat went on to enumerate some of the settlements that the PA was willing to concede: French Hill, Ramat Alon, Ramat Shlomo, Gilo, Talpiot, and the Jewish Quarter in Jerusalem’s old city. Those areas contain some 120,000 Jewish settlers. (Erekat did not mention the fate of other major East Jerusalem settlements, like Pisgat Ze’ev and Neve Ya’akov, but Qurei’s language indicates that they would also remain a part of Israel.)

The Palestine Papers include a rendering of the land swap map presented in mid-2008 to Palestinian president Mahmoud Abbas by Israeli prime minister Ehud Olmert.

In an October 2009 meeting, Erekat also proposed a geographical division of Jerusalem’s Old City, with control of the Jewish Quarter and “part of the Armenian Quarter” going to the Israelis.

Settlements in East Jerusalem are illegal under international law, but the Israelis have long treated them as suburbs.

Ramat Shlomo, indeed, feels little different from Jewish neighbourhoods of Jerusalem. It is a 10-minute drive from the Knesset building, the first exit on highway 1 after crossing the Green Line. The Jerusalem municipality provides services in settlements like Ramat and Neke Ya’akov. Pisgat Ze’ev will soon be connected with downtown Jerusalem via a light rail line currently under construction.

Israelis are deeply divided on East Jerusalem settlements – polls conducted last year by Yedioth Ahronoth and Ha’aretz found that 46 per cent and 41 per cent (respectively) support an East Jerusalem settlement freeze – but the government’s position is resolute. Binyamin Netanyahu, the Israeli prime minister, likes to say that “building in Jerusalem is no different than building in Tel Aviv”; Tzipi Livni says her Kadima party will “never divide Jerusalem” in an agreement with the Palestinians.

That is the Israeli framing. But the PA embraces a similar view, according to The Palestine Papers. And it does so unilaterally: The Israeli side refused to even place Jerusalem on the agenda, let alone offer the PA concessions in return for its historic offer.

In July 2008, Udi Dekel, adviser to then-Israeli prime minister Ehud Olmert, asked Erekat why “your side keep[s] mentioning Jerusalem in every meeting.” Six weeks earlier, he told PA map expert Samih al-Abed that he wasn’t allowed to discuss the subject .

Dekel: I do not have permission to discuss Jerusalem without knowing what arrangements will be in Jerusalem.

Al-Abed: And Abu Ala said we cannot discuss Ma’ale Adumim.

Dekel: So let’s eat lunch together, and let them [leaders] decide what to do.

The PA, in other words, never even really negotiated the issue; their representatives gave away almost everything to the Israelis, without pressuring them for concessions or compromise. Erekat seemed to realise this – perhaps belatedly – in a January 2010 meeting with [US president Barack] Obama’s adviser David Hale.

Erekat: Israelis want the two-state solution but they don’t trust. They want it more than you think, sometimes more than Palestinians. What is in that paper gives them the biggest Yerushalaim in Jewish history, symbolic number of refugees return, demilitarised state… what more can I give?

Palestinian leaders took a more principled stand on other major settlement blocs in the West Bank. In the same meeting where he conceded East Jerusalem, Qurei told Livni that the PA “cannot accept the annexation of Ma’ale Adumim, Ariel, Giv’at Ze’ev, Ephrat and Har Homa settlements”.

All of those (with the exception of Har Homa) are located deep in the West Bank, and their inclusion in Israel would be ruinous for the territorial contiguity of a future Palestinian state. Ariel, for example, is nearly halfway to Jordan, connected to Israel by an 18km stretch of highway 5. 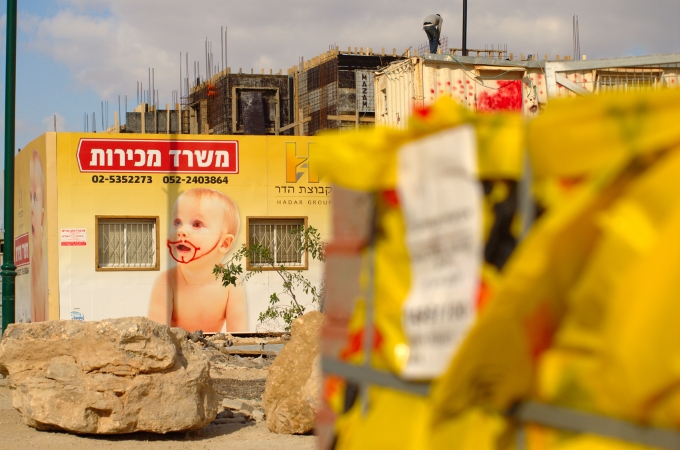 Palestinian laborers work on a housing development in the illegal settlement of Ma’ale Adumim.

But dismantling these settlements is also not an option for the Israeli government. Ariel is a major industrial zone with nearly 18,000 residents. Ma’ale Adumim, east of Jerusalem, is a fast-growing “bedroom community” of 30,000 people; during a recent visit, a group of Palestinian construction worker was building family homes on the settlement’s northeastern slopes.

“The people who will buy these homes, they will not just leave in a few years,” said one of the workers, from the nearby village of al-Jahalin.

There is a third option, which Palestinian negotiators raised in several meetings: those Jewish settlements could be allowed to remain as part of the future Palestinian state. Ahmed Qurei made that suggestion to Tzipi Livni several times in 2008, including this exchange in June:

Qurei: Perhaps Ma’ale Adumim will remain under Palestinian sovereignty, and it could be a model for cooperation and coexistence.

Livni: The matter is not simply giving a passport to settlers.

The Israeli foreign minister refused to entertain the idea. “You know this is not realistic,” she told Qurei in May .

Asked about Qurei’s offer earlier this month, residents in Ma’ale Adumim reacted with a mix of laughter and disbelief. Some wrote it off as a political impossibility; others worried about their safety, claiming that they would be killed.

There is, in other words, seemingly no mutually acceptable policy for Ma’ale Adumim, Ariel, and other major West Bank settlements within a two-state solution – a fact the Bush administration was willing to acknowledge in July 2008.

Rice: I don’t think that any Israeli leader is going to cede Ma’ale Adumim.

Qurei: Or any Palestinian leader.

Rice: Then you won’t have a state!

Rice may prove to be correct: Two and a half years later, the parties are no closer to a solution on settlements, and the Israeli government may be gearing up to issue a “massive” new round of housing permits for illegal settlers in the West Bank.