Haitian prosecutors have charged Jean-Claude “Baby Doc” Duvalier, a former president, with several crimes, including corruption, theft and the misappropriation of funds during his 15-year rule.

Police took Duvalier from the hotel where he was staying in Port-au-Prince on Tuesday, less than 48 hours after he returned to his homeland having spent 25 years in political exile.

“His fate is now in the hands of the investigating judge. We have brought charges against him,” Aristidas Auguste, Port-au-Prince’s chief prosecutor, said.

The charges must now be investigated by the judge who will decide whether a judicial case should go ahead.

Duvalier was allowed to go free after several hours in a closed-court session on Tuesday, although he is not allowed to leave the country.

Duvalier was ousted by a popular revolt in 1986 after his family and supporters were accused of plundering tens of millions of dollars of state funds.

The Tonton Macoutes, a secret police force loyal to Duvalier and his father who ruled before him, have been accused of kidnapping, torturing and killing up to 30,000 suspected opponents during the 1960s and 1970s.

Al Jazeera’s Seb Walker, reporting from Port-au-Prince, said that a few hundred people had gathered to protest against Duvalier’s detention, but this was not indicative of a wider popularity in the country.

“His political support is not widespread, he is not seen as a figure who is relevant to the Haitian political landscape right now,” he said.

“The question everyone is asking is why is he actually here? The timing of his return comes at a time when Haiti’s political process has ground to a halt.

“I don’t think he is a key player when it comes to Haitian politics but we haven’t heard anything from him at all so we don’t know what his political ambitions might be.”

Haiti’s political process has been stalled since disputed presidential elections, which have sparked violence between the backers of rival camps leaving at least five people dead.

There are also rumours that Duvalier, 59, is ill and that he wants to see his country once more before he dies.

Duvalier had earlier told a Florida radio station he was not returning as a presidential candidate, saying: “This is not the order of the day.”

In 2007, Duvalier called on Haitians to forgive him for the “mistakes” committed during his reign.

‘Slap in the face’

Human rights groups criticised his return on Monday, saying he should be arrested and prosecuted.

“Duvalier’s return to Haiti should be for one purpose only: to face justice,” Jose Miguel Vivanco, the Americas director of Human Rights Watch, said.

“Under the presidency of Duvalier … thousands were killed and tortured, and hundreds of thousands of Haitians fled into exile. His time to be held accountable is long overdue.

“Haiti has enough troubles without Duvalier. Duvalier’s presence – unless he is immediately arrested – is a slap in the face to a people which has already suffered so much.”

Haiti was hit by a devastating earthquake in January 2010, followed by a cholera outbreak and a hurricane in November, which flooded the country’s coastal towns. 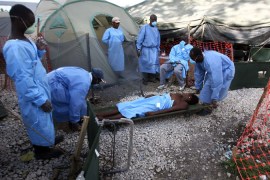 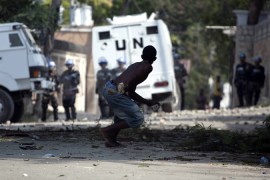