Former Haitian president Jean-Claude “Baby Doc” Duvalier, has met with a string of confidantes at his Port-au-Prince hotel, as speculation continues regarding his surprise return to Haiti in the midst of a political vacuum left by disputed presidential elections.

Returning to his homeland after 25 years in the political wilderness, most of them spent in exile in France, Duvalier did not explain the reason for his return on Sunday, simply saying: “I’ve come to help”.

The US has expressed its shock at the move, with PJ Crowley, the state department spokesman, saying: “We are surprised by the timing of Duvalier’s visit to Haiti. It adds unpredictability at an uncertain time in Haiti’s election process.”

Duvalier’s partner, Veronique Roy, described to the AFP news agency how he bent to his knees and kissed the ground as he set foot on home soil for the first time since his violent ouster in 1986.

Roy suggested the couple’s return had been prompted by the devastating earthquake almost exactly a year ago that killed nearly a quarter of a million Haitians.

“That was the trigger,” she told AFP. “It’s so emotional. We were not expecting this welcome.”

A delegation of former officials who had served as cabinet ministers under Duvalier awaited his arrival at the airport and a few hundred supporters were gathered outside.

Duvalier was ousted by a popular revolt after his family and supporters were accused of plundering tens of millions of dollars of state funds during his 15-year reign.

Duvalier’s unexpected return also came as the country wrestled with the results of a November 28 election that sparked deadly riots over allegations of vote-rigging by the current ruling party.

Jose Miguel Insulza, the head of the Organisation of American States (OAS), met with Rene Preval, the Haitian president on Monday, saying that his group’s report that evaluated the election results,was not binding.

“The technical mission can only make recommendations. It did so with as much clarity as possible. It is now up to Haiti’s Provisional Electoral Council to determine the electoral results,” he said.

A leaked draft of that report appeared to suggest that Jude Celestin, Preval’s protege, should step aside after alleged fraud in the first round of voting.

Duvalier had earlier told a Florida radio station he was not returning as a presidential candidate, saying: “This is not the order of the day.”

In 2007, Duvalier called on Haitians to forgive him for the “mistakes” committed during his reign.

Haitian authorities have accused Duvalier of diverting more than $100m out of the desperately poor country under the guise of social work during his reign.

Human rights groups criticised his return on Monday, saying he should be arrested  and prosecuted.

“Duvalier’s return to Haiti should be for one purpose only: to face justice,” Jose Miguel Vivanco, the Americas director of Human Rights Watch, said.

“Under the presidency of Duvalier and his Tonton Macoutes, thousands were killed and tortured, and hundreds of thousands of Haitians fled into exile. His time to be held accountable is long overdue.

“Haiti has enough troubles without Duvalier. Duvalier’s presence – unless he is immediately arrested – is a slap in the face to a people which has already suffered so much.” 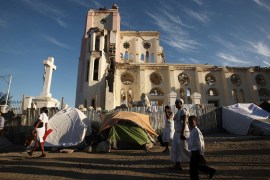 When the earthquake struck, countries rushed to pledge aid – but a year on, we ask where the money is. 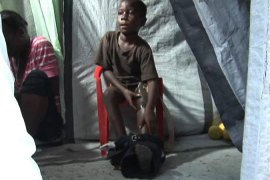 The boy who survived Haiti’s quake

Nixon was pulled from the debris moments after the quake struck on January 12, 2010. 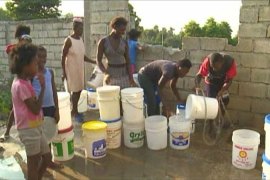 Haiti ‘a republic of NGOs’ 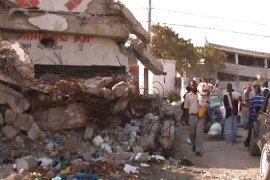 A year after a devastating earthquake, many ask how billions of dollars in foreign aid are spent.