Tunisia’s speaker of parliament has temporarily assumed power in the country a day after president Zine El Abidine Ben Ali fled amid a mass uprising.

Mebazaa took the oath in his office in parliament, swearing to respect the constitution in the presence of his senate counterpart Abdallal Kallel and representatives of both houses.

He said outgoing prime minister Mohammed Ghannouchi would be tasked with forming a new coalition government, adding that “a unity government is necessary in the greater national interest”.

“All Tunisians without exception and exclusion must be associated in the political process,” he said after taking the oath.

Mebazaa has up to 60 days to organise new presidential elections under the Tunisian constitution, Fethi Abdennadher, the head of the court, said.

“The Constitutional Council announces that the post of president is definitively vacant,” Abdennadher said in an address on state television earlier.

“We should refer to article 57 of the constitution, which states that the speaker of parliament occupies the post of president temporarily and calls for elections within a period of between 45 and 60 days.”

Youssef Gaigi, a blogger and activist based in Tunisia, said Tunisians had “mixed feelings” about Mebazaa.

“They don’t know if they can trust this guy because he was also part of the establishment. He was part of the political party that ruled over Tunisia for the past 23 years,” Gaigi told Al Jazeera.

“He was heavily involved in the previous government, which is known now as a dictatorship.”

In an interview later with Al Jazeera, Ghannouchi said that because the current circumstances did not allow for Ben Ali’s return to Tunisia, he would act as the president until elections could be held.

But the court negated that decision with its ruling on Saturday, saying the president had left the position for good.

Meanwhile in another development, Rachid al-Ghannouchi, the exiled head of the country’s banned al-Nahda party told Al Jazeera that he plans to return to Tunisia.

His announcement came after the Arab League  called on Tunisians to unite and bring back peace, saying the events in Tunisia were “historic”.

“This was the will of the people. The people of Tunisia have spoken and the message has been received,” Hesham Youssef, chief of the cabinet of Amr Moussa, the secretary-general of the Arab League, told Al Jazeera from Cairo.

“We hope that the political forces in Tunisia will unite in their call for change and have elections as soon as possible in order to move ahead.”

Ben Ali, who has ruled Tunisia since coming to power in a bloodless coup in 1987, fled the North African country on Friday after protesters rejected his last-minute raft of concessions aimed at bringing several weeks of violent demonstrations to an end.

Saudi Arabia confirmed on Saturday that he and his family had been welcomed into the kingdom due to “exceptional circumstances” in Tunisia.

Initially, it was rumoured that Ben Ali was en route to Paris, but Al Jazeera’s Jacky Rowland, reporting from the French capital, said Nicolas Sarkozy, the French president, had refused to welcome the president following crisis negotiations with his prime minister.

“Although during his years in power Ben Ali had acted in French and western European interests in terms of cracking down on anything resembling radical Islam and also his fight to control illegal migration from Africa,” she said.

“He probably thought those policies would win him refuge in France, but Sarkozy [considered the] large North African community in France, including a large number of Tunisians, most of them opponents of Ben Ali.

“Sarkozy has difficult relations with the North African citizens in France. He figured that to allow Ben Ali to come to Paris would have exacerbated those relations would have provoked outrage among Tunisians in Paris.”

The unrest in Tunisia began on December 17, after a 26-year-old unemployed man set himself on fire in an attempt to commit suicide.

Mohammed Bousazizi’s act of desperation set off the public’s growing frustration with rising inflation, unemployment, and corruption and prompted a wave of protests across the country. 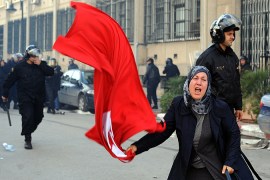 Al Jazeera’s senior political analyst comments on the timing, success and meaning of the Tunisian uprising. 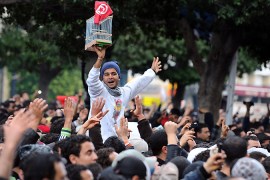 As protesters demand new interim president stand down, Tunisians face uncertainty about what’s next for the nation.