The party announced on Sunday that Marine Le Pen had been elected – a move that clears the way for her to mount a presidential bid next year.

Blonde and more telegenic than her father, Marine Le Pen is looking to soften the party’s image.

“Marine is a different person but our references are the same,” her father was quoted by the Reuters news agency as saying. “She is a woman, 40 years younger than me and in tune with the times.”

But Al Jazeera’s Jacky Rowland, reporting from Paris, said the new National Front leader shared many of her father’s beliefs.

“Marine Le Pen has made a few comments, particularly about guarding the secular nature of the French state,” our correspondent said.

“It’s quite clear that there are still those beliefs – seeking to portray immigration and the Islamic community within France as a threat to French values. Some might find those views offensive, but they also appeal to a great number of voters in France.”

Jean-Marie Le Pen founded the party in 1972 and the 82-year-old former parachute trooper gained international attention when he made it to the second round of the 2002 presidential race.

He led the party until his retirement on Saturday, when he stepped down at the start of its congress in the northern town of Tours.

Eric Pape, a political commentator in Paris, told Al Jazeera that Marine Le Pen would probably “modernise” the National Front to a degree in line with far-right parties in other European countries.

“We’ve seen this in a number of other European countries where younger, hipper leaders – leaders more tapped into pop culture and less attached to old far-right values – take over,” he said.

“What we’re likely to see, as in other countries, is an openness towards women, women’s issues and towards homosexuals.”

Although polls suggest that only 17 per cent of French voters would vote for Marine Le Pen, that could eat into the ruling centre-right UMP party of Nicolas Sarkozy, the incumbent president who is expected to run for re-election in 2012.

Pape told Al Jazeera: “If current President Sarkozy is as unpopular [during the 2012 election] as he is now, he will be tempted to offer some sort of deal towards Marine Le Pen .

“Once the first round of the election has gone through, if she scores as high as she is ranking right now, I think anything could happen.”

Marine Le Pen was born in 1968 in the Paris suburb of Neuilly, but has built a political base as a local councilor in the working-class industrial towns of France’s northern Calais region.

Like her father, she has been unafraid to provoke outrage. Last month she compared Muslims praying in the streets outside overcrowded mosques in France to the Nazi occupation.

While her father failed in all five of his presidential bids over nearly 40 years, the party’s ability to win a steady 15 per cent of the vote enables it to influence political debate. 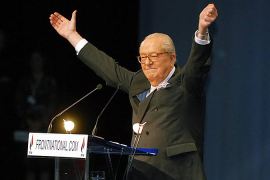 Head of France’s National Front makes unapologetic farewell speech as he hands over leadership to his daughter Marine. 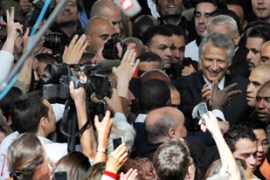 Ex-PM announces new outfit and expected to run for presidency in 2012.