Dozens of towns in Australia’s Victoria state in the far south braced for unprecedented river levels days after the flooding crisis peaked in northeastern Queensland.

About 14,000 homes in the second most populous state were hit by a record deluge on Sunday as the number of deaths rose to 17 in Queensland amid scenes of destruction.

Homes were swamped to waist height as waters wreaked havoc on rural communities in Australia’s southeast, levelling fences and trees and tearing up roads.

Victoria suffered the worst wildfires in Australian history just two years ago in which 173 people died.  Parts of the state were now facing a once-in-a-century flooding, with some towns having never experienced such inundation.

Soldiers were helping people evacuate from their homes while desperate sandbagging was under way in a number of towns, where a season’s worth of rain had fallen in just one or two days.

“We are facing an unprecedented flood event on the Campaspe river,” said Lachlan Quick, an emergency spokesman. “Water volumes of this size have never been seen down this river before.”

Four major rivers in Victoria were in full flood, with 43 towns, 3,500 people and 1,400 properties affected. No deaths have been reported so far in the state.

Flooding also swept through the island state of Tasmania, washing away bridges and forcing hundreds of evacuations.

The flooding in Victoria follows a six-week crisis in Queensland, where floodwaters swallowed an area the size of France and Germany combined, culminating in the swamping last week of Brisbane, Australia’s third largest city, and utter devastation of towns to the west.

Five of Australia’s seven states and territories have seen flooding since January 1.

Al Jazeera’s Andrew Thomas reporting from Brisbane said the cleanup operations were well under way in the second-largest city although the main focus is now on Victoria where the water has been rising quickly.

“Tens of thousands of volunteers were literally pouring into the affected suburbs [of Queensland] trying to clear out houses.

“Earlier there were some reports about less affluent areas with high immigrant populations not getting the necessary attention but residents say it was because the floodwaters prevented volunteers from getting through.”

Our correspondent said there was a carnival-like atmosphere with children handing out biscuits, sausages and water to the “volunteer army” involved in the cleanup operation for days.

Anna Bligh, the premier of Queensland state, said the death toll had risen to 17 since January 10, with the discovery of a woman’s body in a house in the worst-hit Lockyer Valley, west of Brisbane.

As waters receded in Queensland, Bligh said the full scale of destruction was emerging, with the number of flooded homes and evacuations doubling in the past week and the number of properties affected by the waters trebling across an area with a population of 2.1 million.

She warned people to stay out of floodwaters where possible, describing them as a “toxic” soup of rotting animal corpses and food, chemicals and debris.

Wayne Swan, the treasurer for Queensland, toured the ravaged Brisbane suburb of Rocklea hit by the disaster as the federal and state governments pledged about $10m each to the relief fund, which has now raised more than $83m.

“In terms of cost it’s far too early to evaluate,” Swan told AFP of the damage bill. “The priority is to provide immediate relief with emergency payments to the people affected.

“There is certainly a huge impact in terms of tourism, in terms of the export of resources, especially coal, in terms of small businesses. But it’s too early to say how much.” 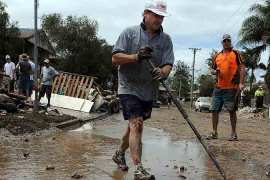 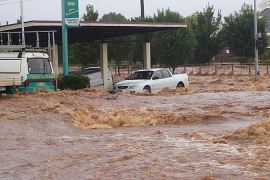 At least 10 people die and 78 others missing in the flood-wrecked Queensland state as further downpours are forecast. 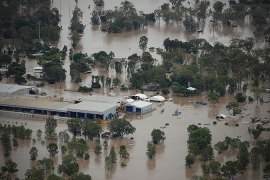 Queensland evacuees come back to scenes of devastation as emergency operations shift to clean-up mode. 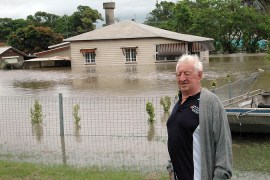