A powerful typhoon has made landfall in the northern Philippines, where authorities have ordered more than 100,000 people to seek refuge from heavy rains and gusts of up to 170km per hour that have blown away roofs, uprooted small trees and toppled power lines.

At least seven people have reportedly been killed when Typhoon Nesat made land fall before dawn on Tuesday over the eastern mountainous region of Isabela and Aurora provinces, facing the Pacific Ocean on Luzon island.

Nesat current has winds of up to 140km/hr, and its storm band spreads over 650km, spreading extreme weather across the entire main Luzon Island as it moves towards the South China Sea.

The National Disaster Risk Reduction and Management Council said that a baby died in the eastern province of Cataduanes after falling into a swollen river. Four other people were reported missing on Tuesday, and authorities fear the death toll could rise further.

Six fishermen were reported missing on Monday, the council said, adding that about 50,000 people are currently in temporary shelters in the central Albay province.

Flights to the country’s central region have been suspended, and schools in Manila, the capital, were closed on Monday in response to heavy rains and strong winds brought on by the typhoon. The Philippine stock exchange was closed on Tuesday, and operations on Manila’s main overhead railway were suspended due to a power outage.

The country’s disaster agency said that hundreds of motorists and ferry passengers were stranded in ports, and soldiers and rescue workers were on alert to help move residents to safety from areas at risk of flooding or landslides.

Graciano Yumul, the head of the weather bureau, said that about 25mm of rainfall was expected per hour, less than half the amount seen in 2009 when typhoon Ketsana submerged large parts of the capital and killed hundreds.

Nesat is the seventh storm that has affected the country since May, and all of these storms have affected the north island of Luzon.

Aere, Songda, Sarika, Haima, Nock-ten and Nanmadol have all brought torrential rains to the island, many of which have triggered widespread flooding and landslides. Nock-ten was particularly devastating, claiming the lives of over 30 people.

Typhoon Nesat covers a huge area, and even 24 hours before landfall, the outer fringes of the storm were already covering the vast majority of the country.

The Philippines began preparations for the storm early. The central provinces of Luzon have halted all ferries and fishing boats, leaving many passengers stranded. Manila, too, was put on a high state of alert, with many schools closing early on Monday.

At the time of landfall, sustained winds were expected to be up to 185 kph. This would make Nesat the equivalent of a category three hurricane on the five-point Saffir-Simpson Scale.

Together with the strong winds, there will also be a significant storm surge of up to 10 metres in places, and the storm is also expected to bring around 500mm of rain. Excessive rains loosens the soil, particularly on ground which has been deforested, and for many parts of Luzon, the ground is already saturated. Typhoon Nesat will inevitablty lead to further flooding and probably more landslides.

The storm is then expected to head northwest towards Vietnam. This would be bad news for the country, which is currently seeing torrential rains from Tropical Depression Haitang, and has already been suffering from flooding in the last few weeks. 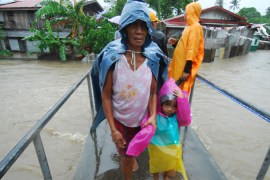 Another Typhoon takes aim at the Philippines

Flood-weary Luzon braces for the worst