Two mechanics were killed at their workplace in the town of al-Restan near Homs, the Local Coordination Committees, a Syrian activist network, said on Tuesday.

City residents were hiding in homes and offices to escape the gunfire, while armoured vehicles were “shooting toward anything moving,” the LCC said, citing witnesses on the ground.

The fresh deaths came as Ban Ki-moon, the United Nations secretary-general, made his strongest remarks yet on the crackdown under way against Syrian anti-government protesters.

He condemned the violence, which he said was being committed by President Bashar al-Assad’s regime against his people during the five-month-old uprising.

Ban called on Assad to take “bold and decisive measures before it’s too late”.

“It’s already too late, in fact,” Ban said in New Zealand, where he was attending a meeting of Pacific leaders.

“If it takes more and more days, then more people will be killed.”

Ban said it was time for UN members to unite and take “coherent measures”.

According to the UN, 2,200 people have been killed since the Syrian uprising began in March, inspired by the revolutions sweeping the Arab world.

The regime blames the unrest on thugs and armed gangs and claims security forces are the real victims, not true reform-seekers.

The government’s violent crackdown on dissent has led to broad international sanctions aimed at isolating the regime.

Separately on Tuesday, a French government official said the European Union was working on a fresh round of sanctions against Syria that would target economic entities.

“We are working with our partners on a seventh round of sanctions that would target economic entities,” said Bernard Valero, a French foreign ministry spokesman.

Information from Syria is hard to obtain or independently verify, as the government has banned foreign journalists and restricts local media during the revolt. 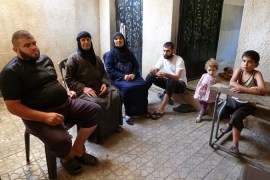 Thousands of Syrians have crossed the border into Lebanon’s impoverished Wadi Khaled region. 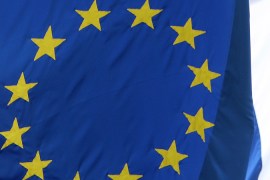 Three companies and businessmen targeted in new round of measures seeking to end brutal crackdown on protesters. 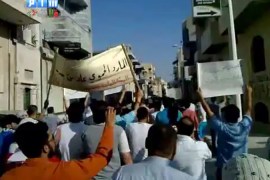 ‘Many killed’ in protests across Syria

Activists say 20 people shot dead by security forces, as the EU steps up pressure on the country’s leaders.