Heavy rains and powerful winds in New York announced the imminent arrival of Hurricane Irene as the storm laid a trail of destruction along the US east coast, leaving at least eight people dead in North Carolina, Virginia and Florida.

Government forecasters have downgraded the storm from category five to category one, the lowest grading, but said Irene would still be a hurricane by the time it reaches Long Island, New York, later on Sunday.

New York’s normally bustling streets emptied out overnight and public transport came to a halt after Michael Bloomberg, the city’s mayor, ordered the first mandatory evacuation ever in the city.

Washington braced for the onslaught, too, as did Philadelphia, the New Jersey shore and, further north, the Boston metropolitan area.

As Irene hit the New Jersey shore, where it made its second landfall after North Carolina, its wind strength diminished substantially, dropping to just 120km an hour, but it still remained a massive storm.

More than 370,000 people were told to leave low-lying areas of New York, mostly in Lower Manhattan, Brooklyn and Queens, by 5pm on Saturday.

But late on Saturday, Bloomberg said the time to leave the city had passed.

“The time for evacuation is over. Everyone should now go inside and stay inside,” he told a news conference.

“Conditions are expected to deteriorate rapidly. The storm is now finally hitting New York City. The winds will increase, the rain will increase and the tidal surge will increase.”

Al Jazeera’s Anand Naidoo in New York’s Times Square said: “As the hours go by, the storm is getting steadily worse. The rain is coming down pretty heavily in the centre of New York … We’re expecting conditions to deteriorate in the hours ahead.”

He said the greatest fear for New Yorkers was flooding, as the city is a series of islands.

Steff Gaulter, Al Jazeera’s senior weather presenter, said: “The hurricane-force winds are actually in a very small portion of the storm, but the rain is heavy and extensive.”

City officials cautioned that if Irene stayed on track, it could bring gusts of 85 mph (137 kph) that could shatter skyscraper windows.

In Maryland, a nuclear reactor at CENG’s Calvert Cliff plant automatically shut down late on Saturday after a transformer was hit by a large piece of aluminium siding dislodged by the storm, a company spokesman said on Sunday.

CENG said the facility was safe, with no impact on employees at the plant or threat to the surrounding area.

Officials fear the storm could paralyse Wall Street and inflict New York’s worst storm damage since at least the 1980s.

All subway services have been suspended because of the threat of flooding in the tunnels – the first time the United States’ biggest urban transit system has been shut down because of a natural disaster.

Officials said there was an outside chance that a storm surge in Lower Manhattan could send seawater streaming into the maze of underground vaults that hold the city’s cables and pipes, knocking out power to thousands and crippling the nation’s financial capital.

The storm has already knocked out power to at least 1.8 million customers from North Carolina to New Jersey and forced the cancellation of more than 10,000 flights.

US officials, mindful of the much criticised slow response to Hurricane Katrina, which killed hundreds in New Orleans in 2005, have been out in full force urging residents in the path of the hurricane to prepare and take heed of local warnings.

US President Barack Obama stopped by an emergency co-ordination centre where federal officials were monitoring the hurricane on large screens and said: “You guys are doing a great job.”

Obama was again briefed on the storm’s track, its impact and response efforts during an evening conference call with senior officials including Joe Biden, the vice-president, Janet Napolitano, Homeland Security secretary, and Steven Chu, the energy secretary. 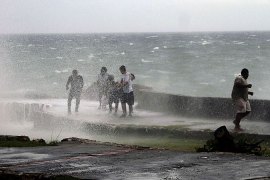 US east coast on hurricane alert 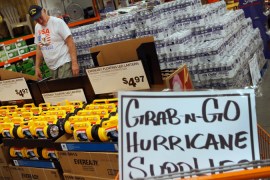 The Atlantic’s first hurricane continues on an ever changing path 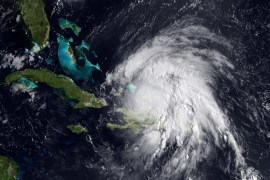 The category-three storm has already caused extensive damage to the Dominican Republic and will hit the US by Sunday. 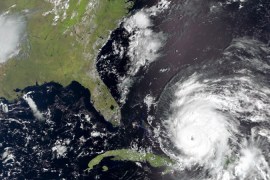 Authorities from North Carolina to New York declare states of emergency as powerful Irene heads toward the US mainland.