India’s parliament is set to debate anti-corruption proposals put forth by activists, in a move that seeks to end an 11-day hunger strike by social activist Anna Hazare.

The strike has united millions of Indians against the government.

Speaking in parliament on Friday, Rahul Gandhi, India’s ruling Congress party leader, welcomed the struggle of the veteran activist for a powerful anti-corruption law, but said one legislation was not enough to fight graft.

Gandhi said the issue was more complex and proposed a wide-ranging set of reform bills, including government funding of elections and transparency in government contracts.

He also criticised Hazare’s fast as “a dangerous precedent for democracy”.

Gandhi’s comments were his first on the crisis since Hazare began his hunger strike 10 days ago. Gandhi, whose mother Sonia Gandhi is the head of Congress party, is seen as a potential prime minister.

Hazare has called for parliament to pass a tough law creating a government watchdog to root out corruption.

The campaign by 74-year-old Hazare has led to the biggest protests in decades from a middle class fed up with endemic bribes.

He has emerged as a hero for hundreds of thousands of Indians who have rallied behind him in the face of widespread corruption and a political class seen as arrogant and out of touch.

Prime Minister Manmohan Singh’s government, humiliated by the massive outpouring of popular support for Hazare’s hunger strike, on Thursday announced at an all-party meeting that it would debate all the proposals on the table.

The debate on Hazare’s proposals may take place on Saturday as parliament struggled on Friday to agree on the wording of several of the proposals, sources in the ruling Congress Party told the Reuters news agency.

There was some confusion on whether Hazare would end the fast at the start of the debate or when the anti-corruption bill would be passed.

“It [the debate] is not listed in the business of today. There doesn’t seem to be a likelihood of it being taken up today,” Pawan Kumar Bansal, the parliamentary affairs minister, said on Friday.

Hazare has lost 7kg, but his health is stable, doctors said.

After a personal appeal from Singh, Hazare said on Thursday evening he would consider breaking his fast if parliament began discussing his proposals, including incorporating low-level civil servants into graft investigations.

With state polls next year before a general election in 2014, Singh is under intense pressure to end a crisis that has paralysed policy making and parliament, as well as further dented his popularity which was hit by high inflation and a slew of corruption scandals.

Political parties have united to ask Hazare to end the public fast that has drawn tens of thousands of supporters daily to an open ground in the capital, New Delhi. 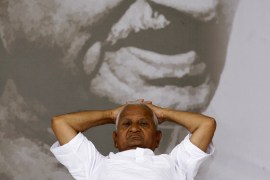 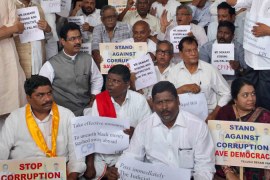 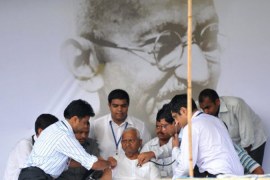 Manmohan Singh writes to Anna Hazare, saying he will ask for discussion on his version of anti-graft legislation.