Kim Jong-il, the North Korean leader, says his country is ready to impose a moratorium on nuclear tests and production if international aid-for-disarmament talks on its atomic programme resume.

Kim, at a summit held in eastern Siberia with Dmitry Medvedev, the Russian president, reportedly made no mention of an issue that lies at the heart of negotiators’ worries: North Korea’s recently revealed uranium enrichment programme.

Natalya Timakove, Medvedev’s spokeswoman, was quoted by the ITAR-Tass news agency as saying that Kim expressed readiness to return to the nuclear talks without preconditions, and, “in the course of the talks, North Korea will be ready to resolve the question of imposing a moratorium on tests and production of nuclear missile weapons”.

Kim and Medvedev met at the hotel of a military garrison near the city of Ulan-Ude in Buryatia on Wednesday. It is Kim’s first trip to Russia since 2002, and it follows a marked easing in tensions between North and South Korea.

Nuclear envoys from the Koreas met last month on the sidelines of a regional security summit for what were described as cordial talks. A senior North Korean official then traveled to New York for talks with his US counterparts.

North Korea has repeatedly said it wants the so-called six-party nuclear talks to resume. Washington and South Korea, however, have been wary, calling first for an improvement in the abysmal ties between the Koreas and for a sincere sign from the North that it will abide by past commitments it has made in previous rounds of the nuclear talks.

South Korea’s Yonhap News Agency said in an editorial that many had hoped the summit would signal change for the tense Korean peninsula, but the results instead seemed a “storm in a teacup, lacking any new content”.

“The communist country has a track record of alternately using provocations and dialogue with South Korea, the United States and other regional powers to try to wrest concessions before backtracking on agreements
and quitting the nuclear talks,” the editorial said of the North.

Yonhap quoted an unnamed South Korean official as saying the results fell short of the expectations of South Korea, the United States and Japan. The official raised the need for the North to address its uranium enrichment programme.

Yang Moo-jin, a professor at the University of North Korean Studies in Seoul, hailed the North’s willingness to freeze its missile and nuclear tests, but noted there was no clear mention of the North’s uranium enrichment
programme, which can also make nuclear weapons.

“The North already has weaponized plutonium, and enriched uranium is something that can be proliferated in an easier manner,” Yang said.

Medvedev said Russia and North Korea moved forward on a proposal to ship natural gas to South Korea through a pipeline across North Korea.

North Korea had long been reluctant to help its powerful archenemy increase its gas supply, but recently has shown interest in the project. The South wants Russian energy but is wary of North Korean influence over its energy supply.

Medvedev, in televised comments, said the two countries will create a commission on “bilateral cooperation on gas transit”.

He said two-thirds of the 1,100km pipeline would traverse North Korea to stream up to 10bn cubic meters of gas a year to the South. Russia’s state-controlled gas monopoly, Gazprom, said the pipeline is likely to carry gas from the giant offshore fields near the Pacific island of Sakhalin.

The two leaders also discussed restructuring North Korea’s Soviet-era debt to Russia, said a Kremlin official speaking on condition of anonymity. That debt totals about $11bn, according to a top Russian official.

The North’s launching of a long-range rocket in April 2009 drew widespread international sanctions and condemnation, and an angry North Korea retaliated by pulling out of the six-party nuclear talks.

North Korea is believed to have enough weaponized plutonium for at least six atomic bombs, and last November it revealed a uranium enrichment program.

North Korea has carried out two nuclear tests, in 2006 and 2009, and is believed to be working toward mounting a bomb on a long-range missile.

In March, Russian Deputy Foreign Minister Alexei Borodavkin traveled to the capital of Pyongyang and urged North Korean officials to impose a moratorium on nuclear and ballistic missile tests and to allow international monitors back into its main nuclear complex near the capital.

Kim was expected to return to North Korea following his meeting with Medvedev.

The itinerary for Kim’s visit has been largely kept secret due to security worries. 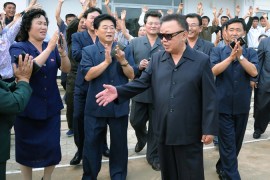 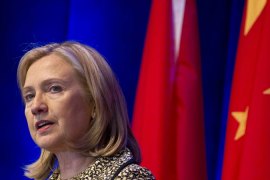 US secretary of state says envoy to visit New York this week to discuss how to resume stalled talks on denuclearisation. 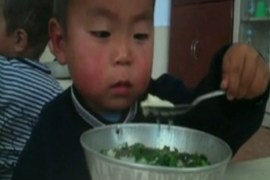 US yet to decide on North Korea aid

Aid groups fear a repeat of the 1990 famine that killed an estimated 1 million people. 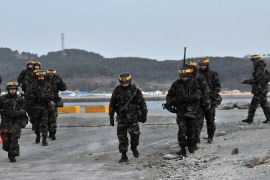