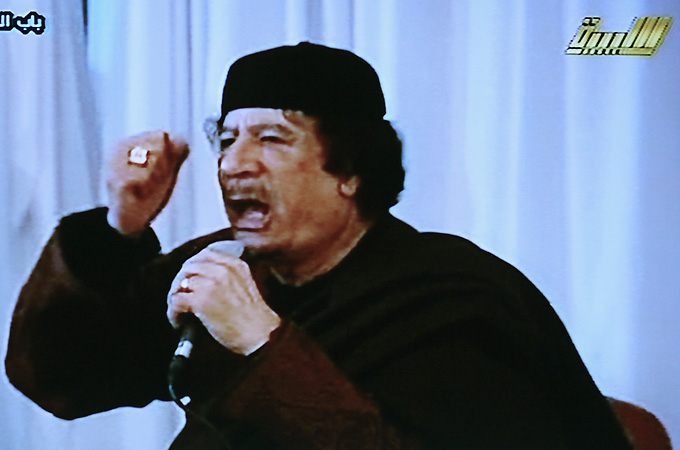 Since he lead a successful military coup in 1969, Gaddafi styled himself as Libya’s “brother leader” and the “guide of the revolution,” as an almost paternal figure looking after Libya’s six million inhabitants.

In February, one week into the uprising, Gaddafi vowed to die as a “martyr” on Libyan soil

Days after it began, Gaddafi gave a televised speech in which he vowed to hunt down protesters “inch by inch, room by room, home by home, alleyway by alleyway.” The speech caused anger that fuelled the armed rebellion against him.

He was born in 1942 in the coastal area of Sirte to nomadic parents. He went to Benghazi University to study geography but dropped out to join the army.

Gaddafi came to power in 1969 at the age of 27 after leading a bloodless coup against King Idris.

The Libyan leader was an admirer of the Egyptian leader Gamal Abdel Nasser and his Arab socialist and nationalist ideology. As a strong member of the Non-Aligned Movement during the Cold War era, he tried to mold the Libyan political system in a way which he said was an alternative to both capitalism and communism.

Gaddafi argued for the creation of a “United States of Africa” – an idea first thought of by US pan-Africanist Marcus Garvey – in which the continent would include “a single African military force, a single currency and a single passport for Africans to move freely around the continent”. He also supported membership among countries in other parts of the world whose citizens are mostly part of the African diaspora, including Haiti and Jamaica.

In 1977 he changed the country’s name to the Great Socialist Popular Libyan Arab Jamahiriyah (State of the Masses) and allowed people to air their views at people’s congresses.

Some critics dismissed his leadership as a military dictatorship, accusing him of repressing civil society and ruthlessly crushing dissident. The regime has imprisoned hundreds of people for violating the law and sentenced some to death, according to Human Rights Watch. 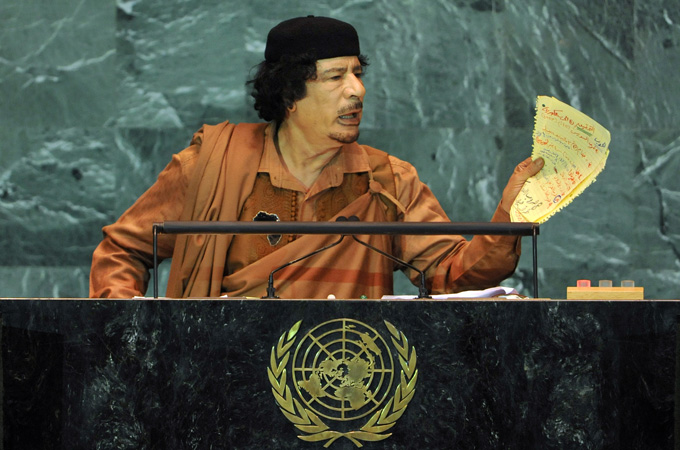 “Gaddafi, gradually as he took power, he used force and he used brutality,” Mohammed al-Abdalla, the deputy secretary-general of the National front for Salvation of Libya, told Al Jazeera.

“In the 1970s against students, when he publicly hung  students who were marching, demonstrating, demanding rights in Benghazi and in Tripoli and many other squares, and his opposition members abroad in the 1980s, including here in London and other places in Europe and in in Arab Middle East.

Gaddafi has maintained a position of anti-imperialism throughout his rule, supporting independence movements against colonial rule around the world. He has allegedly given material support to groups labelled “terrorists” by numerous wealthy countries, including Colombia’s FARC and Northern Ireland’s IRA.

Libya’s alleged involvement in the 1986 bombing of a Berlin nightclub in which two American soldiers were killed prompted US air attacks on Tripoli and Benghazi, killing 35 Libyans, including Gaddafi’s adopted daughter. Ronald Reagan, then the US president, called him a “mad dog”.

The 1988 Pan Am bombing over Lockerbie is possibly the most well-known and controversial incident in which Gaddafi has been involved.

The normalisation of relations with Western powers has allowed the Libyan economy to grow and the oil industry in particular has benefited.

However, Gaddafi and Lockerbie came back into the spotlight in 2009, when al-Megrahi was released from a Scottish prison on the grounds that he was terminally ill and was nearing death. He returned to Libya to a hero’s welcome from Gaddafi and many Libyans, sparking condemnation by the the US and the UK, among others.

His speech was supposed to last 15 minutes, but exceeded an hour and a half. He tore up a copy of the UN charter, accused the Security Council of being a terrorist body similar to al-Qaeda, and demanded $7.7tn in compensation to be paid to Africa by its past colonial rulers.

Inspired by uprisings in Tunisia and Egypt, Libyans began to hold protests against his regime in the eastern city of Benghazi in February of this year.

Demonstrations were met with military force and the protests escalated into an all out armed conflict, with NATO-led forces intervening to ostensibly protect civilians but giving material aid, and later openly siding with the opposition forces.

On June 27, the brutal actions of the government were referred to the International Criminal Court and arrest warrants were issued for Gaddafi, one of his sons and his spy chief on charges of crimes against humanity.

Gaddafi repeatedly blamed the unrest on al-Qaeda and a “colonialist plot”. He called those opposed to him “rats”, and alleged that they had been influenced by “hallucinogenic drugs”. In his last address before rebels entered Tripoli, he accused “Western intelligence” of “working with al-Qaeda to destroy Libya.”

His current whereabouts are unknown, though it seems increasingly unlikely that he is still in the Libyan capital. 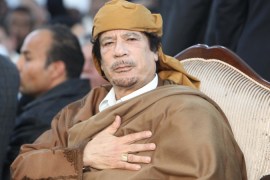 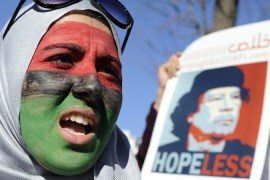