Security forces in Syria have again used deadly force to clamp down on protests as citizens gathered across the country for Friday prayers and to call for the end of President Bashar al-Assad’s government, according to activists and witnesses in the country.

At least 20 people were reportedly killed in a number of cities and towns, including Douma, Aleppo, Homs, Hama and Deir ez-Zor, activists from the Syrian local co-ordinating committee, a rights group, said.

Reports initially put the death toll at 23, but the figure was later revised.

Security forces fired on protesters in the Midan district of Damascus, one activist said, though he added that he could not see if anyone had been injured or killed.

In two other suburbs of the capital, Douma and Saqba, five people were reportedly killed, he said.

One man was killed early on Friday while trying to flee when security forces began arresting residents in Saqba, Rami Abdel Rahman, head of the Britain-based Syrian Observatory for Human Rights, told the AFP news agency.

In Homs, north of the capital, one man was shot and killed as security forces fired on worshippers leave the Aadawiyya Mosque following prayers, a local activist told Al Jazeera.

Another man was killed in Hama near the Tawheed Mosque when security forces opened fire after prayers.

Hama has been under a military siege since the beginning of Ramadan, and local activists report at least 200 people have died there, while more than 1,000 have been arrested.

In cities throughout the country, military and internal security troops attempted to surround mosques and seal off nearby roads in an effort to prevent residents from gathering for the weekly Friday protests that began roughly five months ago and have continued despite a bloody crackdown.

Protesters have demanded an end to Assad’s 11-year reign, with some even calling for his execution. Assad’s father, Hafez, held power in Syria from 1971 until his death in 2000.

This week’s demonstrations were called the “Friday of We Will Not Kneel but to God.”

In Deir ez-Zor, which like Hama has been under siege for the past two weeks, the area outside the Arouda, Ibn Abi Taleb and Hrouil mosques erupted into chaos after security forces and plainclothes “thugs” opened fire on people leaving prayers and attacked them with batons, another local activist told Al Jazeera.

Two people were killed on Friday, and a further two died overnight; a 65 year old man, and a 15 year old boy.

Casualties were reported, but the number could not be verified.

The activist said 89 residents have been killed in the recent crackdown, and that tanks and troops continue to occupy the town’s central square.

Two mosque minarets have been destroyed in the violence, one of them on Friday, further angering residents.

In Zabadani, a mountain town near the border with Lebanon, troops and men in plainclothes attempted to prevent residents from gathering at the Jisr Mosque.

They fired guns in the air and beat worshippers who attempted to protest, an activist said.

Another witness in Zabadani said the military and security forces had tried to stage a pro-government rally.

Meanwhile, US Secretary of State Hillary Clinton said on Friday Syria would be better off without Assad and called on nations that buy oil or sell arms to Syria to cut those ties.

“President Assad has lost the legitimacy to lead and it is clear that Syria would be better off without him,” Clinton told reporters on Friday, alongside visiting Norwegian Foreign Minister Jonas Gahr Stoere.

But Clinton stopped short of explicitly demanding that Assad step down , a call US officials say President Barack Obama’s administration has decided to make in the coming days.

The United States is being careful to promote a broad international response “so that there will not be any temptation on the part of anyone inside the Assad regime to claim that it’s only the United States” or the West leading the campaign against Damascus, she said.

She added that the “entire world” was against the crackdown.

Clinton also said that the US ambassador to Damascus, Robert Ford, had delivered a “clear message” to the Syrian government, alluding to his meeting Thursday with Syrian Foreign Minister Walid Muallem.

“Immediately stop the violence, withdraw your security forces, respond to the legitimate aspirations of the Syrian people for a democratic transition in concrete and meaningful ways,” she said, reading out the message. 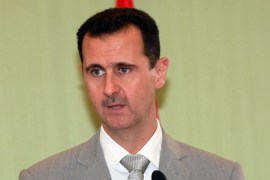 US: Assad has lost legitimacy to rule

US to work on building international consensus for action, as Syrian uprising death toll reaches 2,000. 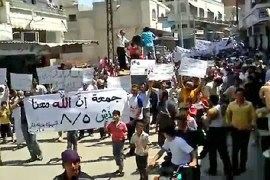 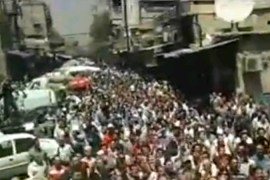 Friday protests across the nation, a day after Assad announces political concessions and US says he has lost legitimacy.