Egypt’s former interior minister, Habib al-Adly, and six senior security officials have appeared in court for the continuation of their trial that began in April.

The accused all face charges related to their involvement in the killing of protesters during the revolution earlier this year, which toppled the government of Hosni Mubarak.

During Thursday’s trial in Cairo, several boxes of evidence were presented by the various sides.

“We have been seeing many boxes being opened and these notebooks and documents coming out,” Al Jazeera’s Sherine Tadros reported from outside the court.

“Some of those books that have been submitted into evidence contain various bits of information. We understand that some of them show which security units in fact had live ammunition.

“This is all in an effort to try and determine if the precise order was given to the police officers to kill protesters.”

Al-Adly, along with his aides, is accused of having ordered the shooting of demonstrators during protests that toppled Mubarak and led to more anti-government protests in the Arab world.

He is also being held responsible for the insecurity that prevailed after police disappeared from the streets of Cairo in the early days of the protests.

After the evidence was presented on Thursday, the presiding judge, Ahmed Refaat, adjourned the trial until August 14, saying he would allow lawyers additional time to look through the material.

Describing the importance of the trial for Egyptians, Al Jazeera’s Tadros said: “These are all the senior key figures, the buck really stops with these people when it comes to the ordering of the killing of protesters, which is what the prosecution is trying to prove.

“But of course, there are other questions as to what about the other layers of security personnel that were involved.

“There were 27 police officers suspended from the force – most of them very high ranking – because they are accused of killing protesters, so why are only six on trial? And two of those six on trial have been released on bail.

“Certainly there is a lot of scepticism around this trial and whether it is just cosmetic – just getting the big guys while those layers beneath are still out roaming the streets.”

According to an official toll, 846 people were killed and several thousand wounded during 18 days of massive nationwide street protests that forced Mubarak to quit on February 11.

Al-Adly was the first member of Mubarak’s government to be put on trial in another case where he faced charges of fraud and money laundering.

He has already been sentenced to 12 years in jail in that separate corruption case.

The removal of al-Adly from office was one of the chief demands of protesters when they launched the revolution against Mubarak’s regime on January 25.

Mubarak faces similar charges of corruption and complicity in the killing of protesters.

In the first day of his trial held on Wednesday, he plead not guilty to all the accusations against him.

“I categorically deny all the charges,” Mubarak said, speaking from a hospital stretcher where he lay inside a cage for defendants.

Wednesday was his first public appearance since the day before he stepped down as president.

There have been reports of his ailing and deteriorating health.

Mubarak will remain in a hospital near Cairo until his trial resumes on August 15. 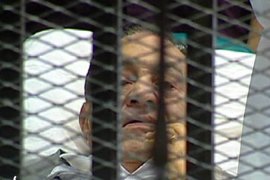 Mubarak denies all charges against him

Incarcerated within court cage, former Egyptian president lying on a stretcher denied all charges before the judge. 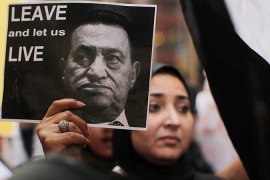 All the president’s trials

Will the trial of Hosni Mubarak, the former president of Egypt, mark a turning point for the country? 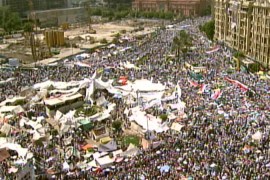 Liberals opt out of this Friday protests, accusing Islamic parties of hijacking the revolution. 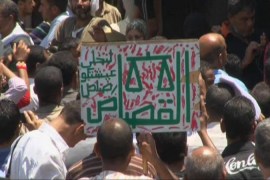 Activists rally for ‘unity’ in Egypt

Tens of thousands of people gather in Cairo’s Tahrir Square in bid to show political parties united in seeking change.