There has been more violence in the Pakistani city of Karachi, where at least 42 people have been killed since Monday.

Rehman Malik, Pakistan’s interior minister warned on Tuesday of stern action against those involved in the latest round of violence in the country’s commercial capital, blaming “criminals and militants” for the unrest.

The Pakistani interior minister said at least 18 of the killings targeted political activists, and that the government had prepared a plan to tackle the deteriorating law and order situation in the city.

“We will take every possible action to restore peace in Karachi,” he said, adding that results of the government’s action will be visible soon.

The latest round of violence has been attributed to a fight for political influence in the city between Karachi’s main parties, Tyab said.

The embattled city, where police say about 200 people were killed in last month alone, is home to Pakistan’s main port, stock exchange and central bank. It has not seen a month as deadly as July in almost 20 years.

Local media put the toll even higher, with the Dawn newspaper reporting that 318 people were killed during the month.

After violence erupted last month, hundreds of extra police and paramilitary troops were deployed in Orangi, Karachi’s largest and one of its poorest slums.

More than 100 people were killed during three days of violence in the slum at that time.

The Rangers, an internal security force, took control of the area, but violence has since spread to other parts of the city of more than 18 million.

Calls for peace by the government and other political parties have also failed.

On Monday, at least 90 vehicles were set ablaze in different parts of the city.

In one incident, at least 80 motorcycles were burnt when dozens of people stormed a textile factory late on Monday and set fire to the vehicles parked outside the industrial unit.

Over the years, criminal gangs have been used by political parties in a city-wide war for influence in Karachi, which contributes about two-third of Pakistan’s tax revenue.

On Monday, the independent Human Rights Commission of Pakistan (HRCP) attributed much of the violence to these political parties, though it also said that criminal elements were “exploit[ing] the breakdown of law and order”.

“While gangs of land-grabbers and mafias have tried to exploit the breakdown of law and order, they do not appear to be the main directors of the horrible game of death and destruction; that distinction belongs to more powerful political groups and it is they who hold the key to peace,” it said.

Tyab said that the battles between smaller and local groups happen as a result of a politically motivated “turf war”.

“What we understand is that the political parties in Pakistan have been exploiting the divisions that exist in this city … and often they will turn to the underworld, the criminals, to carry out their dirty work,” he said.

The HRCP had previously said that 1,138 people were killed in Karachi in the first six months of 2011, of whom 490 were victims of political, ethnic and sectarian violence. 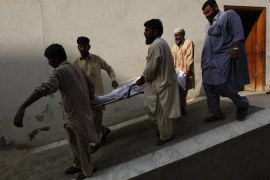 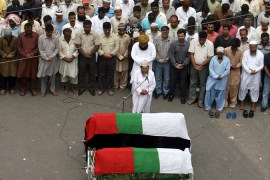 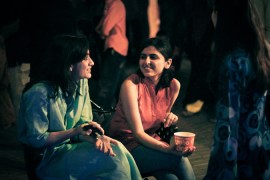 An urban redevelopment project gives wealthy residents a reprieve from recent violence, but not everyone is welcome. 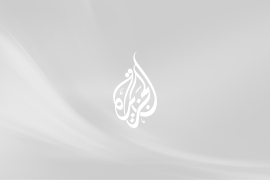