Hosni Mubarak, Egypt’s ousted president, has denied charges of corruption and complicity in the killing of protesters at the start of his historic trial in Cairo.

At his first court appearance on Wednesday, Mubarak spoke from a hospital stretcher where he lay inside a cage for defendants.

“I categorically deny all the charges,” Mubarak said.

The proceedings, in a temporary court at the Police Academy in Cairo, was shown live on state television.

Ahmed Refaat, the presiding judge, later adjourned the trial, announcing that it would resume on August 15.

Mubarak’s trial had been one of the key demands that has united protesters since February 11, the day he was toppled.

The charges he faces include premeditated murder, the killing of protesters, the failure to use his power to stop abuses against civilians, and collusion with other individuals in the misuse of state funds.

Mubarak’s two sons, Gamal and Alaa, who are also on trial for corruption, denied the charges against them as well.

They accompanied their father inside the metal defendants cage, both wearing white prison uniforms.

Mubarak was flown to Cairo for the trial from Sharm el-Sheikh, the Red Sea resort where he has lived since his removal from power.

In the courtroom, a prosecutor read the charges against Mubarak.

“Yes, I am here,” Mubarak said from his bed, raising his hand slightly when Judge Refaat asked him to identify himself and enter a plea.

Al Jazeera’s Sherine Tadros, reporting from outside the court, said: “Mubarak was looking very alert. He has dyed his hair black as we normally see him.

“He is in a bed of course, but I think it will come as somewhat of a surprise to everyone – especially given the reports of his deteriorating and ailing health – that he does look so well and alert at this trial.”

Mubarak’s lawyer Farid el-Deeb, made a number of requests to the court, notably that he wanted to summon a total of more than 1,600 witnesses including Field Marshal Mohamed Hussein Tantawi, Mubarak’s long-serving defence minister.

Such a proposal has the potential to turn the trial into an interminable exercise.

“[El-Deeb] asked for Tantawi – who is also the defence minister and effectively the person running the country right now – to become a witness within this trial,” our correspondent said.

“He said it was Field Marshal Tantawi who has been in control of this country since the 28th of January.”

Terming it an “important development”, Al Jazeera’s Tadros said: “I think it raises a lot of questions about  the proceedings of this trial, how many others serving still – within the government, within the authority, within that structure – are going to be implicated in what is going on”.

More than 800 people were killed and about 6,000 wounded in the 18 days of protests that eventually toppled Mubarak’s government.

Habib el-Adly, Mubarak’s former interior minister, and six senior police officers are being charged with murder and attempted murder in connection with those killed during the uprising.

Outside the heavily secured court site, a screen had been erected to show the trial, and crowds gathered to watch the proceedings. Pro- and anti-Mubarak protesters faced off, some hurling stones.

Hundreds of police tried to calm them down. The state news agency said 53 people were injured in the clashes.

At a small pro-Mubarak rally, people chanted “Oh Mubarak, hold your head high” and “We will demolish the prison and burn it down, if Hosni Mubarak is sentenced.”

Counter-chants of “Raise your voice, freedom will not die,” rose from nearby group hostile to Mubarak.

After Wednesday’s session, Judge Refaat said Mubarak would be moved to a Cairo hospital and would have to attend the next session of his trial. He said the court would reconvene the next day in el-Adly’s case.

In its reaction, the US – a longtime ally of the Mubarak’s government – said it was confident that the proceedings would be fair.

“It’s very important that it be a free, be a transparent and … fair process,” Mark Toner, the US state department deputy spokesman, said.

“We have confidence that they can do that. We believe that Egyptian authorities are able to carry out … a fair trial in this case. And that’s really ultimately up to them to do so.” 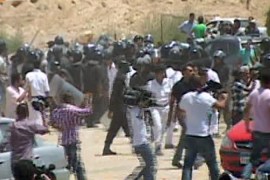 Scuffles break out during Mubarak trial

Supporters and opponents of Mubarak pelt stones at each other as deposed leader appears for trial in Cairo court. 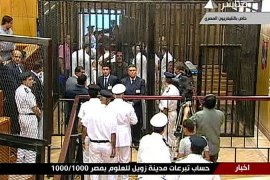 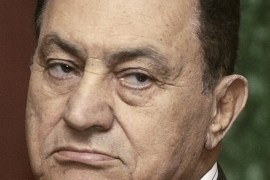 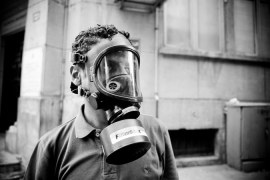 Egyptians are continuing to stage protests calling for change in Cairo’s Tahrir Square.