Turkey’s Prime Minister Recep Tayyip Erdogan has been meeting military leaders to decide on new heads for all the branches of the armed forces.

The four-day gathering of the Supreme Military Council, which reviews annually the promotion prospects of senior officers, follows the surprise resignation of the country’s four top generals last week.

The meeting has never before been held without the main military leaders in attendance and it will be the first time a civilian government decides who commands the various armed forces in Turkey.

Armed forces chief Isik Kosaner and the separate heads of the army, navy and air force all resigned on Friday in a row with Ankara over the promotion of dozens of officers held in a probe of alleged plots to oust the government.

Following the resignations, Erdogan named as acting forces chief General Necdet Ozel, who was the head of the military police.

Ozel, who was also tapped to head the army on an emergency basis, is co-chairing the promotions meeting.

Tensions between Turkey’s secularist military and the ruling Justice and Development Party (AKP) have been
building for years.

About one tenth of the army’s generals are in custody over an alleged plot presented at an army seminar in 2003, to involve plans to bomb mosques and provoke tensions with Greece, in order to spark political chaos and justify a military takeover.

Seventeen generals and admirals currently in line for promotion were among those jailed in the “Sledgehammer” plot prosecutions. Altogether nearly 200 officers were charged with conspiracy.

The suspects face between 15 and 20 years in jail, though the case has been marred by serious doubts over the authenticity of some implicating documents.

Some analysts say the feud over promotions is part of the ruling party’s strategy to ensure its fiercest opponents within the military do not rise to key posts.

Huseyin Celik, the AKP vice president, said the executive branch will no longer adhere to the tradition of rubber stamping candidates fronted by the army chief.

“In your capacity [as army chief], you can propose names, but you can’t impose,” Celik was quoted as saying in the Milliyet newspaper on Sunday.

Appointing Ozel as permanent army chief is unlikely to cause further confrontation, as he has been portrayed positively as a constitutionalist pro-government general.

Ilter Turan, professor of politics at Istanbul’s Bilgi University, told Al Jazeera that the new appointment will not affect the army’s role in defending Turkey.

“There seems to be a large pool of capable commanders, so there will not be a shortage of people who are able to command,” said Turan.

Ozel is not expected to be confirmed as the overall commander until the key promotions are announced on Thursday. 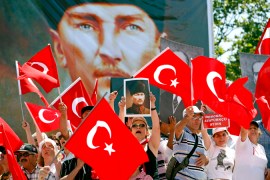 Recent resignations by Turkish military generals may mark a change in the military’s historic role in politics. 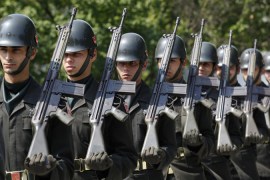 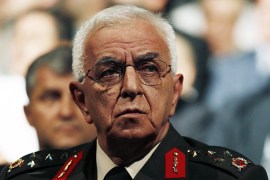