Libyan leader Muammar Gaddafi has ruled out talks with the opposition fighters seeking to end his 41-year-rule.

But at the same time, a spokesman for his government has expressed interest in entering into a dialogue with the US.

“There will be no talks between me and them until Judgment Day,” Gaddafi told a crowd of thousands of his supporters in his home city of Sirte on Thursday in a remotely delivered audio message. “They need to talk with the Libyan people … and they will respond to them.”

The remarks came as his foreign minister reportedly met his Russian counterpart to discuss the Libyan leader’s exit from the country.

The audio message, however, cast doubt on a flurry of recent international efforts to negotiate an end to a deepening conflict.

In another speech broadcast by Libyan television, Gaddafi addressed “a meeting of Misurata tribes”, calling for “a march on the city [east of Tripoli] to liberate it” from the opposition fighters.

But his representatives are reportedly ready to hold more “productive” talks with senior US officials, a Libyan government spokesman said on Friday.

The statement followed a meeting between representatives of the two governments in Tunisia last weekend.

“We did explain many things to American officials. We realised they did not have the full picture; we corrected much misinformation,” he said.

The spokesman also said that the Libyan government remained “very powerful” despite five months of war with the fighters and a NATO bombing campaign.

The opposition has escalated its offensive against Gaddafi’s forces east of the capital Tripoli, capturing one of the most prominent government commanders along the way.

After two days of fighting, they moved their position to about 4km forward from Dafniyah, a small town between Zliten and Misurata, on Thursday.

“We are now close to an area called Tuesday Market in Zliten and, God willing, we will liberate our people in Zliten soon from the forces of the tyrant.”

Al Jazeera’s Hoda Abdel Hamid, reporting from Misurata on Thursday, described General Abdul Nabi Zayed, the captured commander, as one of the most high-value prisoners taken by the opposition to date.

Zayed allegedly co-ordinated the deployment of tanks into Misurata in March which triggered the recent fighting.

“According to the military commanders here in Misurata, Zayed was actually captured yesterday as they started their offensive towards the town of Zliten. He was slightly injured, so he was brought back to the hospital here in Misurata,” she said.

“Its also a significant catch because it is happening at the time the opposition started their push towards Zliten. They have made significant territorial gains. Rebel commanders are saying they are interrogating General Zayed and they are hoping he will give them significant information.” 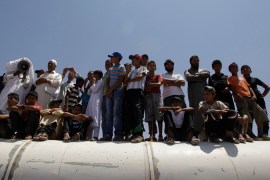 An economic crisis loomed over the rebel-held east as the Contact Group met in Turkey to discuss the stalemate. 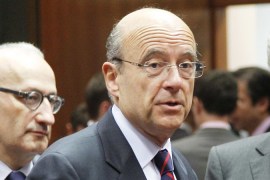 French foreign minister says Libyan leader could be allowed to stay in his country if he relinquishes power.