Afghanistan’s president has accused Pakistan of firing 470 rockets and mortars into two eastern provinces of his country over the past three weeks.

In a statement issued after a meeting of his National Security Council on Sunday, Hamid Karzai said the bombardment had killed 36 people, including 12 children, and demanded that it “be stopped immediately”.

“If they are not being carried out by Pakistan, Pakistan should make it clear who is behind the attacks,” Karzai added.

The Afghan president said he had discussed the issue with Asif Ali Zardari, his Pakistani counterpart, on the sidelines of an international counterterrorism conference in Iran, but Zardari denied that government forces were behind the shelling.

On June 1, around 200 fighters crossed into northwest Pakistan and attacked a checkpoint, killing at least one police officer.

On June 16, around 250 men staged a similar cross-border attack on a village to the south of the earlier incursion, killing at least six civilians.

The Reuters news agency later revised its account of the first assault, saying up to 400 fighters had participated and killed 27 members of the security forces.

The attacks appeared to be part of a summer surge in activity by the Pakistani Taliban and other armed groups, such as the Haqqani network.

The Pakistani shelling targeted areas in the Kunar and Nangarhar provinces where NATO forces have withdrawn and where Pakistani Taliban have moved in, Afghan border officials said.

Kunar and Nangarhar sit across from the Pakistani areas that were hit in the June cross-border raids: Lower Dir District and Bajaur Agency.

In response to the Pakistani barrage, Afghan security forces in the eastern provinces of Khost and Paktika – which lie several hundred kilometres south of the area of the raids – fired artillery across the border at least twice on Friday, Afghan government spokesman Mohammad Zahir Azimi said.

Afghan security officials said NATO also fired into Pakistan on June 17. NATO and Pakistan military officials earlier denied any knowledge of such border fire from the Afghan side.

The Afghan president said he also discussed the cross-border artillery fire with US General David Petraeus, the overall NATO commander in Afghanistan, and US Ambassador Karl Eikenberry.

American and Afghan officials have pressured Pakistan to end its security forces’ long-standing relationship with the Taliban movement, viewed as a tool for Pakistani influence over Afghanistan.

Afghan border police spokesman Edris Mohmand said 2,000 families have fled districts threatened by the barrage, including Asmar and Nangalam in Kunar, and Goshta district in Nangahar.

“All these attacks have been from Pakistan’s side and for sure they are Pakistani weapons being used against innocent Afghans,” Mohmand said. “The border police in the eastern region have been equipped with heavy artillery, but we are waiting for orders from the interior minister.”

Violence has been on the rise across Afghanistan since the Taliban launched a spring offensive and promised retaliation for the death of al-Qaeda leader Osama bin Laden in a US raid in Pakistan on May 2.

In one incident on Saturday, an eight-year-old girl was blown up carrying a bomb in a bag as she approached policemen in southern Afghanistan, authorities said.

They said no one else was hurt in the attack, which took place in the Char Chino district of Uruzgan province.

The girl was killed on the same day that a suicide bomber blew up his sport utility vehicle at a health clinic in eastern Afghanistan while women and children lined up for maternity care and vaccinations. At least 35 were killed. 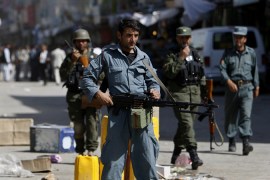 Taliban claims responsibility for attack killing six officers, as the US prepares for a troop withdrawal. 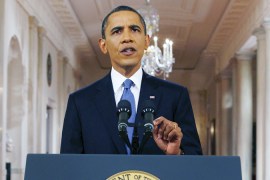 US president says al-Qaeda threat now from Pakistan in speech announcing drawdown of 33,000 troops by summer of 2012. 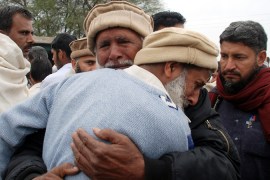