Gun battles between forces loyal to Libyan leader Muammar Gaddafi and rebel fighters in the northwest city of Nalut have left at least eight rebel fighters dead and 13 more wounded, according to a fighter.

The fighting in Nalut comes a day after rebels captured a 2km stretch west of Misurata in central Libya.

“The revolutionaries destroyed six armoured vehicles and killed more than 45 enemy soldiers. The rebels surrounded Gaddafi’s forces, who are holed up in a compound.”

“We can hear small arms and machine guns as well,” he said. “Mortars and missiles are also being used.

“The opposition holds ground from the Tunisian border to a position where some fighters are [barely] 80km away from Tripoli.”

NATO has accused Gaddafi of using mosques and children’s parks as shields for his military operations, saying the long-time ruler who lashed out against alliance air strikes is the one ”brutally attacking the Libyan people”.

Hours later, at least two explosions shook Tripoli as NATO jets soared above the capital. It was not immediately clear what had been hit or if there were casualties in the late afternoon raid.

As the fighting continued, Libya’s rebel oil chief accused the West of failing to keep up its promises to deliver urgent financial aid, saying his authority had now run out of cash completely.

Libya’s economy relies on oil exports and opposition fighters have struggled to make ends meet, as damage to energy infrastructure brought production to a halt, in what used to be a major OPEC oil producer in North Africa.

Speaking to Reuters in the eastern rebel stronghold of Benghazi, oil and finance minister Ali Tarhouni said the cash had yet to arrive four months into the war.

“We don’t have any (cash). We are running out of everything. It’s a complete failure. Either they (Western nations) don’t understand or they don’t care. Nothing has materialised yet.

“And I really mean nothing,” he said.

Authorities in eastern Libya are struggling to find cash to pay for military operations as well as salaries in a society where, thanks to the legacy of Gaddafi’s centralised rule, most people depend on state wages.

Asked why he thought it was taking Western nations so long to produce money, Tarhouni said: “No idea. … I am tired of asking them.”He had earlier estimated the rebels were spending up to $86 million per day.

“I don’t expect us to produce oil any time soon. The refineries have no crude oil, so they are not working,” he said. “People died for this revolution and are still dying. We will find a way (to raise money). One thing is for sure: We will never give up.”

Meanwhile, international officials arrived in Cairo for Arab League round table talks on possible solutions for the crisis in Libya. The conference is the second to be held in Cairo since the Libyan revolt erupted almost five months ago.

Participants include the secretary-general of the Arab League, Amr Moussa, high representative of the European Union Catherine Ashton, chairperson of the African Union Jean Ping, UN envoy to Libya, Abdellah El-Khatib and Habib Kaabachi, director of political affairs at the Organisation of the Islamic Conference (OIC).

Ban Ki-moon, the secretary-general of the United Nations, participated via video conference.

The officials met a day after Libyan TV aired an audio speech of Gaddafi during which he vowed that the NATO alliance, which is providing air support for rebels attempting to dislodge him from Tripoli, “will be defeated”.

NATO on Friday dismissed an apparent offer of elections by Gaddafi as a cynical public relations ploy and vowed to continue its mission until his forces no longer posed a threat to civilians. 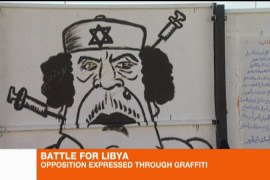 Freedom of expression explodes in Libya

Writing on the wall for Gaddafi as street artists express their views in rebel-controlled areas. 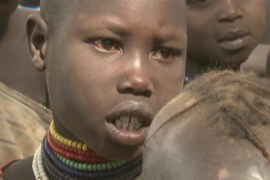 Plan for free childrens’ education at risk after $50m is found missing from ministry. 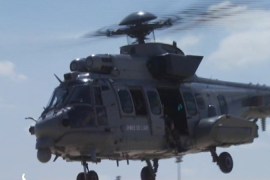 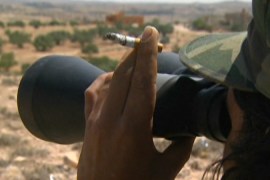