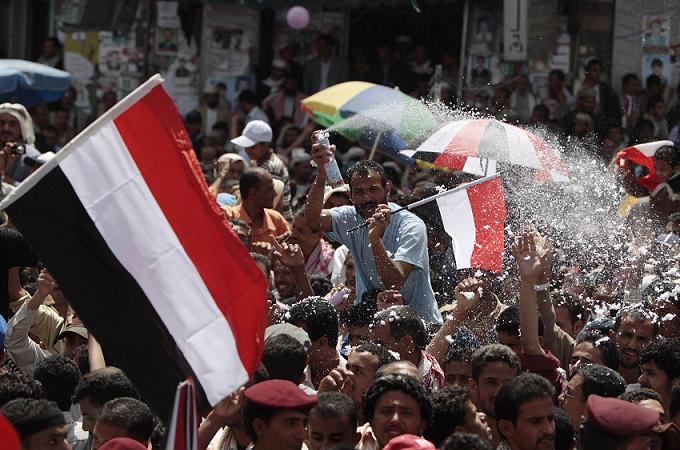 Pro-democracy protesters say they will stay in the streets; behind the scenes, a few players are vying for power [Reuters]

Yemeni president Ali Abdullah Saleh’s departure for medical treatment in Saudi Arabia leaves something of a power vacuum in the country, which has been ruled by one man for decades.

Tareq al-Shami, a senior member of the ruling General People’s Congress, said on Sunday that Saleh would return from Saudi Arabia “within days”. But a number of political actors will surely vie for power in Saleh’s absence – and after his potential return.

Tens of thousands of people remain on the streets of Sanaa and other cities, the same men and women who have spent months demonstrating – often braving tear gas, snipers and armed thugs. They have pledged to remain, with leaders of the movement describing Saleh’s departure as a first step and promising to push for further democratic reforms.

But complicating that goal is the handful of political players who see Saleh’s absence as a chance to seize more power.

Government sources in Yemen said on Sunday that Saleh’s sons and nephews have not left the country. That gives Saleh a strong power base inside Yemen; the president has spent years consolidating power within his family.

The elite Republican Guard is headed by Saleh’s son, Ahmed, long viewed as a potential heir to the presidency. His nephew Yahya leads the riot police; another nephew, Tariq, is the head of Saleh’s personal bodyguards.

Several other brothers and nephews hold key positions in the military and intelligence services as well. Collectively, Saleh’s family commands tens of thousands of troops, many of them the best-trained and best-equipped in Yemen.

Saleh’s relatives have kept a low profile since his departure; none of them have issued public statements.

The sons of Abdullah al-Ahmar, the former leader of the Hashid tribal confederation, constitute one of the strongest political forces in the country.

Hamid al-Ahmar has long been considered a potential successor to Saleh. He is one of the most powerful businessmen in the country, with a controlling stake in the Sabafone mobile phone network and a number of other companies. One of his brothers, Himyar, is the deputy speaker of parliament; another, Hussein, is a leader of the Hashid.

Fighting between Saleh’s forces and tribesmen loyal to the Ahmars has paralysed the Yemeni capital for weeks. Saleh’s men shelled the Ahmar compound in Sanaa last month; al-Ahmar’s men have been blamed for the rocket attack against the presidential palace this week, though the government has not proved that allegation.

That fighting could well continue in the post-Saleh era. Analysts say the Ahmar family needs to be included in talks about Yemen’s future, and that an uncoordinated transition – a power vacuum – would lead to prolonged fighting between the Ahmars and the Salehs.

“What happens now depends under what condition he’s leaving. If it’s with no arrangement or settlement, then [Saleh’s] son and nephews will take over, and they will be fighting directly with the sons of Ahmar,” said Ali Seif Hassan, a political analyst in Sanaa. “It will be war.”

Another wild card is General Ali Mohsen, the head of Yemen’s first armoured division, the largest branch of the regular Yemeni army. A 2005 US embassy cable, released by WikiLeaks, described him as the “most powerful military man in the land”.

He defected in March, ordering troops under his command to protect peaceful protesters in Sanaa and elsewhere, and his men have clashed on numerous occasions with forces loyal to Saleh. Those clashes seem to be ongoing. Two people were killed on Sunday, and more than a dozen injured, in a grenade attack on a building used by Mohsen’s troops (no one has yet claimed responsibility, though).

Mohsen was once a close ally of Saleh’s (and he is also the president’s half-brother), but relations between the two men chilled in recent years. In part, that’s because of Mohsen’s political ambitions; he felt overshadowed by Saleh’s son and heir apparent, Ahmed.

More recently, Saleh tried to have the general killed. He asked Saudi Arabia to bomb a compound in northern Yemen where Mohsen was; the Saudis “sensed something was wrong about the information”, according to another leaked US cable, and did not carry out the bombing raid.

Mohsen has said publicly that he does not want to be president, but he is also known to be politically ambitious.

Yemen’s vice president for the last 17 years, Abd-Rabbu Mansour Hadi, was elevated to the presidency after Saleh left the country – through Yemeni officials insist this is a short-term measure. (Yemen’s constitution allows the vice president to take over for 60 days if the president is “absent.”) 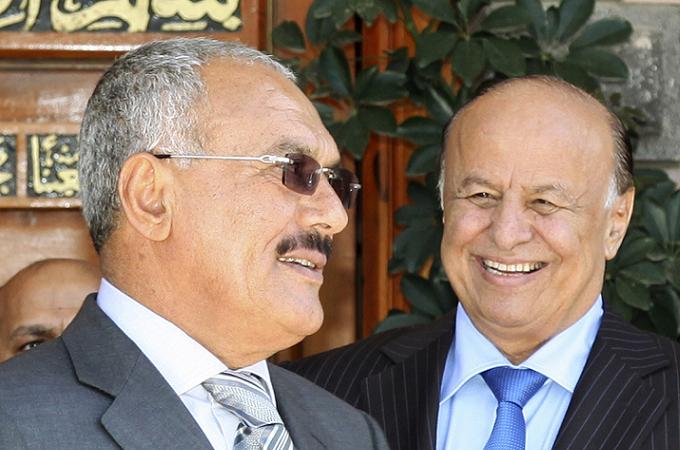 Hadi was appointed vice president in 1994, at the end of Yemen’s civil war. He was born in Abyan province in southern Yemen, so his appointment was something of a concession to southerners following the civil war – but a canny one, since Hadi was viewed as a weak figure in Yemeni politics.

Most of his career was spent in the military, including a stint as minister of defence.

Hadi has kept a low profile since the uprising began. A deal negotiated by Gulf Cooperation Council states – which Saleh refused to sign on three separate occasions – would have installed him as president after Saleh’s departure.

But it is unclear whether the newly-elevated vice president has any desire to keep the presidency.

“Hadi has been a background player since he was named [vice president], while Saleh’s family and clan continued to gobble up the headlines and positions,” said Gregory Johnsen, a Yemen scholar at Princeton University. “But power has been known to dazzle most who draw near.”

Then there is Yemen’s official political opposition, which has played at best a limited role in the events of the last few months.

Most of Yemen’s opposition parties are united under the banner of the Joint Meeting Parties (JMP), an eclectic coalition of Islamists, socialists and tribal elements. The JMP spent weeks trying to broker Saleh’s exit; last month, it signed the GCC deal.

But that signature put them at odds with the protesters on Yemen’s streets, who were angry at the deal’s promise of immunity and its 30-day window for Saleh to step down.

The JMP has historically been a disorganised party, and it has few recognisable leaders; the internal dysfunction means it is unlikely to gain any significant power in a post-Saleh Yemen.