Spain’s ruling Socialists reeled Monday from an unprecedented mauling in local elections as protesters vented their anger over the highest jobless rate in the developed world.

The drubbing was a grim omen for the party ahead of general elections due next year, when the conservative Popular Party (PP) of Mariano Rajoy is expected to romp into office after eight years in opposition.

Support for the government collapsed on Sunday in the face of the beleaguered economy, soaring unemployment and massive week-long street protests.

“The tsunami of May 22 drowns the Socialists,” said the centre-left El Pais, Spain’s leading daily.

“The PP has more regional power than ever,” the paper added. “The triumph of the party of Mariano Rajoy was indisputable, overwhelming, as he was hoping to open the way to the prime minister’s office.”

With all ballots counted, the Socialists had captured just under 28 per cent of the total compared to 37 per cent for the Popular Party.

Pressure could now grow from inside and outside the Socialist party for Jose Luis Rodriguez Zapatero, the Spanish prime minister, to call for early elections, though he vowed on Sunday night to hang on to the end of his term in March next year.

Zapatero said he will pursue reforms to fix the economy and expand employment until the end of his mandate, due March 2012.

Three years of economic crisis took their toll, said Zapatero, who has promised not to stand for a third term in 2012.

“It destroyed thousands of jobs. It is a crisis that had profound effects on citizens’ morale. I know that many Spaniards suffer great hardship and fear for their futures.

“Today, without doubt, they expressed their discontent,” he said.

Grinding in the humiliation, Socialists lost historic bastions Seville and Barcelona, a city they had run since the first municipal vote in 1979 four years after the death of dictator Francisco Franco.

While the outcome of local elections does not always forecast general elections, the centre-right opposition PP will try to turn Sunday’s momentum into a victory at the national level.

“This is a beautiful day for our party. We’ve won the best result in our party’s history in municipal and regional elections,” Mariano Rajoy, who will be the PP candidate in the next general elections, told cheering supporters.

The unexpected success of a new alliance of Basque separatist parties prompted cries of alarm in the Spanish press on Monday.

The party, Bildu, was able to field candidates in Sunday’s election only after a lengthy court battle to prove it was not a mouthpiece for armed separatist group ETA.

Far exceeding expectations, Bildu came second in Sunday’s polls with just over one quarter of the total, behind the Basque Nationalist Party’s 30 per cent but well ahead of the Socialists’ 16 per cent, results showed.

In the region’s second largest city San Sebastian, it even took the most votes, winning eight seats to seven for the Socialists – who have held power there since 1991 – and six each for the moderate Basque Nationalist Party and Spain’s main conservative opposition Popular Party.

Bildu “has redesigned the electoral map of the Basque Country after the best results ever obtained for the ‘radical left’,” Spain’s leading daily El Pais said.

Spain’s Constitutional Court on May 6 reversed a Supreme Court decision to ban some 250 lists of candidates from the Bildu coalition because of links to ETA’s political arm Batasuna.

Spaniards had been patient during four years of economic trouble, but this wore out in the run-up to the elections when tens of thousands of mostly young protesters took to the streets.

Dubbed “los indignados” (the indignant), demonstrators across the whole of Spain have filled the main squares for eight days to show outrage over economic stagnation and government austerity.

Spain has struggled to emerge from a recession, and the collapse of the construction sector and a slump in consumer spending have hit the young particularly hard – 45 per cent of 18- to 25-year-olds are unemployed.

The protest movement has captured the mood of many Spaniards who have been out of work for months and face a bleak future as the economy is not yet growing robustly enough to create jobs.

While most protesters are young, organising themselves through Twitter and social media, middle-aged and older people joined the crowds, frustrated with stagnation.

The PP is expected to call for early elections, but does not have enough seats in parliament to win a vote of no confidence.

The Socialists must choose in the next few months a successor to Zapatero, who has said he will not run for a third term. Alfredo Perez Rubalcaba, the deputy prime minister, and Carme Chacon, the defence minister, are both contenders.

Analysts said Zapatero wants to hang on as long as he can, giving the economy more time to pick up and boosting the Socialists’ chances to win again or at least to limit PP gains.

“They’re waiting for the rain to stop. If the economy improves in the third quarter and unemployment also improves, they can say it’s because of their economic reforms,” said Antonio Barroso, an analyst with Eurasiagroup consulting firm, who sees Zapatero remaining in office until Marc.

The election took place against the backdrop of the Eurozone debt crisis, which forced Zapatero to make steep spending cuts to fend off concerns that Spain would follow Greece, Ireland and Portugal into budget problems and a bailout.

The austerity measures have held back economic growth and some sectors are still destroying jobs. 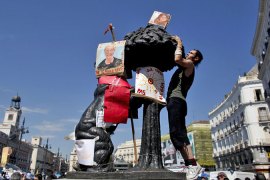 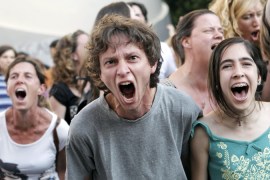 Tens of thousands of protesters furious over soaring unemployment keep up their week-long movement on election day. 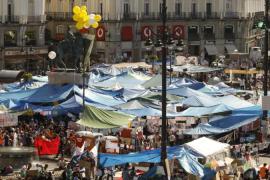 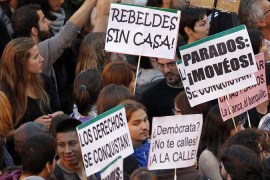 Spain’s electoral commission says protests set for this weekend by thousands of people are “illegal”.