Yemen’s president has for a second time backed out of a Gulf-sponsored deal to transfer power.

The long awaited agreement brokered by the Gulf Co-operation Council (GCC) would have seen Ali Abdullah Saleh stepping down within a month.

Yemen’s opposition had earlier said the deal would be signed on Wednesday.

But the head of the GCC, a group of Gulf states, left Sanaa, the capital, without securing a signed agreement.

The departure of Abdullatif al-Zayani suggested that differences remained despite the government and opposition earlier agreeing on the deal in principle.

Zayani had been in Sanaa since Saturday to try to persuade the sides to sign the deal, with help from US and European diplomats.

“Saleh wants to show the international community that he is not an oppressor and a dictator, that he is willing to leave power peacefully and democratically, where in reality that is not the case,” Hakim al-Masmari, editor-in-chief of the Yemen Post, told Al Jazeera.

Masmari said Saleh’s backtracking on his initial agreement “is only putting him in a bad image and showing the world that his words are not credible and that he has lied not only to the opposition but also to the GCC officials”.

The White House, meanwhile, urged Saleh to sign and implement a transition of power deal so that the country could “move forward immediately” with political reform.

John Brennan, an adviser to Barack Obama, the US president, called Saleh earlier in the day, the White House said in a statement.

“Brennan noted that this transfer of power represents the best path forward for Yemen to become a more secure, unified, and prosperous nation and for the Yemeni people to realize their aspirations for peace and political reform,” the statement said.

Brennan also reiterated that all parties in Yemen should “refrain from violence and proceed with the transition in a peaceful and orderly manner”.

Earlier, Al Arabiya television had quoted an adviser to Saleh as confirming the signing would take place on Wednesday.

“The president will sign for the government in his capacity as president of the republic and as head of the ruling party,” Yahya Abu Usbua, an opposition official, told the Reuters news agency earlier.

But some protest groups had said they would not accept the GCC plan.

He said at the time he would only sign in his capacity as ruling party leader, not as president.

He and his party had then agreed that he would sign as president of both the party and the country.

The US and neighbouring oil giant Saudi Arabia, both targets of foiled attacks from al-Qaeda’s Yemen wing, have been keen to see an end to Yemen’s political stalemate out of concern that continued chaos could give the group more room to operate freely. 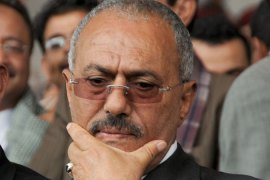 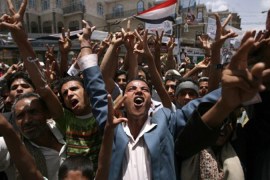 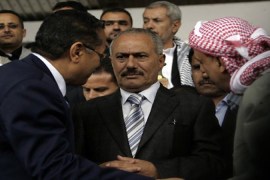 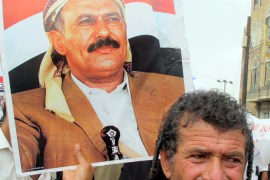