The AP news agency quoted Mustafa Osso as saying that dozens were injured after the protesting students were attacked with batons on Tuesday.

He said many of the students were chased into their dormitories and badly beaten.

The university has seen several anti-regime demonstrations in the past weeks.

Meanwhile, Syrian activists used Facebook to call for a general strike throughout Syria on Wednesday to protest against the security crackdown.

One of the protesters’ main Facebook pages, The Syrian Revolution 2011, had a picture of a child saying “father, your participation in the strike is a guarantee for my future”.

Osso said security forces with clubs also dispersed a rally on Monday of about 3,000 in the central city of Homs.

On Monday, thousands of demonstrators marched through the Damascus suburb of Saqba at the funeral of Ahmad Ataya, who died of wounds inflicted when security forces fired at a pro-democracy rally in the capital last month.

It was the biggest protest in the Damascus outskirts since a security crackdown there began three weeks ago.

The US and the European Union said on Tuesday that the international community was planning further sanctions against Syria over its brutal crackdown.

“We will be taking additional steps in the days ahead,” Hillary Clinton, the US secretary of state, told reporters in Washington, when asked if recent events raised the bar for taking Syria to the international court or the UN Security Council.

The White House warned the Syrian government that the “window is narrowing” for Damascus to halt its crackdown and avoid further sanctions.

In Paris, Alain Juppe. the French foreign minister, said it appeared that a majority of nine of the UN Security Council’s 15 members were being assembled to vote for a resolution condemning Syria.

“There is still the threat of a veto by Moscow and Beijing,” two of the five permanent members who have the power to block resolutions, he added.

There have also been protests in the southern city of Deraa and in other towns across the country.

On Tuesday, Syrian tanks moved into the city of Nawa, near Deraa, after encircling it for the past three weeks, activists told the Reuters news agency.

Osso also told the AP there was little news from the western town of Tel Kelakh, a town of about 70,000, which has been under siege by security forces since Thursday.

He said residents of nearby areas were still hearing cracks of gunfire but it was not clear whether there were injuries.

At least 16 people  – eight of them members of the same family – have been killed in recent days in Tel Kelakh, witnesses and activists said.

On Monday, the National Organisation for Human Rights said in a statement that at least 34 people had been killed in the past five days in the villages of Inkhil and Jassem, also near Deraa.

It said that Assad’s crackdown on anti-government demonstrations has killed more than 850 people nationwide since the turmoil engulfed the country in mid-March.

Ammar Qurabi, the head of the organisation, said five bodies were discovered in Deraa on Monday.

There were also unconfirmed reports that bodies were found in a grave there. Residents said villagers had found 13 bodies while digging on farmland.

A Syrian interior ministry official dismissed reports about the grave as “completely baseless”.

The unnamed official, quoted by state-run news agency SANA, said on Tuesday that the “allegations came in the context of the campaign of provocation, slander and fabrication” against Syria.

Residents of Deraa, where anti-government protests first took place, said hundreds of people have been missing since tanks and soldiers moved in last month to crush opposition to Assad’s rule.

Accounts of the mass grave could not be independently verified as Syrian authorities have all but sealed off the country to foreign journalists.

In a statement released on Tuesday, the UK-based rights group Amnesty International said Syrian authorities must carry out a “prompt, impartial investigation” into reports about the mass graves, which if true, “show an appalling disregard for humanity”. 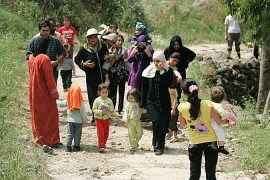 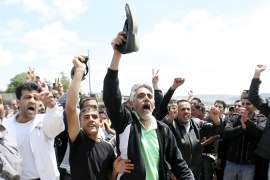 At least seven killed as thousands of civilians flee into neighbouring Lebanon to escape the security crackdown. 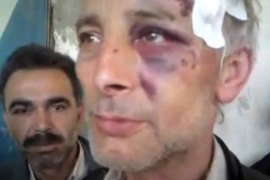 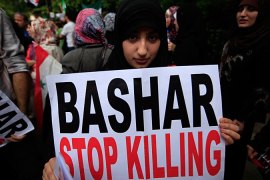 As the Syrian government continues its crackdown on protesters, will a new stance from Turkey have any influence?