Tropical storm Aere has hit the northeastern Philippines, killing at least 11 people and forcing more than 100,000 villagers to flee from towns threatened by landslides.

The storm slammed into Catanduanes province on Sunday with winds of 85 km per hour and gusts of 100 km per hour.

It triggered landslides and floods, disrupted transportation and knocked out power in some towns.

An elderly woman drowned while trying to cross a swollen river in Daraga town in Albay province, about 340 kilometres southeast of Manila, and a man was electrocuted in a flooded village in Libon town.

Three men drowned in Catanduanes and Leyte provinces, and a driver died in a truck crash during stormy weather in Camarines Sur, officials said.

By Monday, the storm was heading towards provinces on the northern Luzon Island, losing strength.

Authorities have evacuated villages in farming communities at the base of Mayon volcano in Albay, where heavy rain threatened to turn into mudslides.

Tons of ash have been deposited on Mayon’s slope from past eruptions, and mudslides caused by a typhoon in 2006 buried entire villages, leaving about 1,600 people dead and missing, Alejandro said.

More than 4,700 commuters were stranded in several seaports after ferries suspended trips and roads were closed due to floods and the danger of landslides, officials said.

More than 50 international and domestic flights have been cancelled because of the storm.

Taiwan on Monday issued a sea warning and told residents on the eastern and southern parts of the island to watch out for torrential rain. 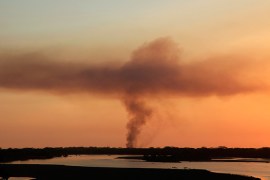 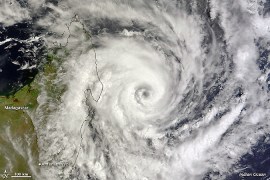 Australia’s Cyclone season, and that of the Southwest Indian Ocean, have taken a turn for the worse. 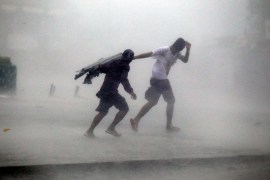 authorities say the death toll has risen to 10 after the super typhoon smashed into the north of the country. 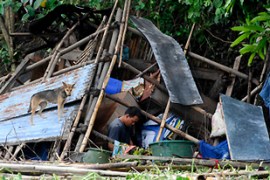 People returning to their homes as Mirinae, which caused 14 deaths, weakens into storm.