Syrian troops backed by tanks have swept into Baniyas, a hub of anti-government protests, as residents formed human chains in a bid to halt the military operation, rights activists said.

Electricity and communications were cut early on Saturday as the tanks entered along three axes heading towards the southern sector of the city on the Mediterranean coast.

Protesters were resisting by forming human chains, the activists said, reached by telephone from the Cypriot capital Nicosia. Tanks also encircled the nearby town of Baida while an army boat patrolled offshore, they added.

“Residents are reporting the sound of heavy gunfire and seeing Syrian navy boats off the Baniyas coast. Sunni and mixed neighbourhoods are totally besieged now,” one rights campaigner, who did not want to be identified, said.

The military sweep into Baniyas in northwestern Syria comes two days after a convoy of 40 military vehicles pulled out of the southern town of Deraa, another protest centre, which the military had locked down since April 25.

“It looks like they are preparing to attack the town, like they did in Deraa,” one activist said.

Dozens of people were killed during the 10-day military assault on Deraa, launched with what activists termed “indiscriminate” shelling of the town.

But General Riad Haddad, the military’s political department chief, insisted that troops in Deraa “did not confront the protesters”.

“We continue searching for terrorists hidden in several places. As the army, we never confronted the protesters,” Haddad said.

Meanwhile, Syrian opposition figures called on Bashar al-Assad, the Syrian president, to embrace democracy and hold elections within six months, saying he could transform the country and become a source of pride.

Addressing Assad, The Syrian Revolution 2011 Facebook page said “The solution is simple: Stop shooting at demonstrators, allow peaceful demonstrations, remove all your photos and those of your father, release all political prisoners, allow political pluralism and free elections in six months.”

This is the first time that anyone in the opposition has offered such detailed proposals.

The Facebook page, a motor of anti-regime protests, said “you will be the pride of contemporary Syria if you can transform Syria from a dictatorship into a democracy. Syrians would be grateful for that, and it is possible to do”.

On Friday, up to 30 people were killed in what protesters called a “day of defiance”.

Human rights group Insan said that at least 16 people had been killed in the central city of Homs, six in Hama and two in Jableh. It said the total death toll was 26 but didn’t specify where the other two deaths occurred.

A human rights activist told the Associated Press news agency that 30 people had died, while Syrian state television said an army officer and four police were killed in Homs by a “criminal gang”.

Human rights groups say that more than 600 people have been killed and 8,000 jailed or gone missing in the crackdown on protesters since demonstrations erupted in mid-March.

The United States warned Friday it would take “additional steps” against Syria if it continues its brutal crackdown on protesters, a week after imposing tough sanctions on the Arab nation.

Bashar al-Assad belongs to the minority Alawite sect, an offshoot of Shia Islam, and Alawites occupy most senior positions in the army and security apparatus.

Authorities described Baniyas as a “centre of Salafist terrorism” and said armed groups had killed soldiers near the city.

Civic leaders in Baniyas issued a statement denying the accusation and saying the authorities were trying to spread fear among the Alawites.

“They are targeting Sunnis. I regret to say that the propaganda that Assad is spreading that the Alawites will not survive if he is toppled is receiving an audience among our Alawite neighbours, although the demonstrations have been for freedom and unity, regardless of sect,” Anas Shughri, a protest leader, said earlier this week. 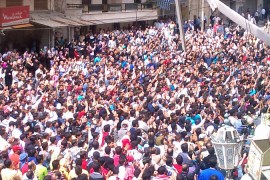 Up to 30 reportedly killed in the cities of Homs and Hama, as protesters around the country take to the streets. 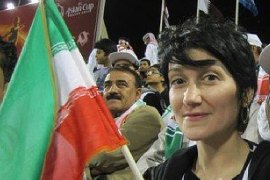 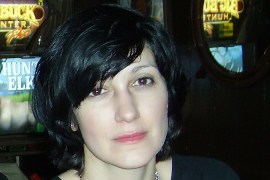 The fiance of Dorothy Parvaz, an Al Jazeera journalist held in Syria, appeals for her to be set free. 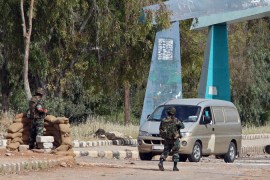 Tanks and troops are reported to have been deployed in central Syria and coastal areas in bid to quell protests.