A signing ceremony for a Gulf-brokered deal to end Yemen’s political crisis has been postponed after Ali Abdullah Saleh, the country’s long-serving president, refused to sign the agreement in Sanaa.

“The signing of the agreement is postponed.”

Yemen’s opposition also said they will not go to Riyadh, where they had been expected to join GCC foreign ministers to sign the deal stipulating Saleh’s departure.

“There is no longer an invitation. The general secretary of the GCC left yesterday without the president’s signature, so the initiative has failed,” Mohammad al-Sabri, an opposition official, told AFP.

Abdul-Latif al-Zayyani, secretary-general of the GCC, left Sanaa on Saturday after failing to get Saleh to endorse the initiative.

“Four sessions of talks were held to convince him, and every time he came up with a new condition,” he said.

The GCC deal proposes the formation of a government of national unity, Saleh transferring power to his vice-president and an end to the deadly protests that have rocked Yemen since late January.

The Secretary-General could return to Sanaa as early as Monday to attempt to hammer out a compromise with Saleh, a source told Reuters.

While Yemen’s opposition political parties have accepted the deal, many anti-government protesters have rejected it because of the fact that it will keep Saleh – in power for 32 years – from being tried.

They called for him to be put on trial for corruption and the deaths of an estimated 142 protesters since the opposition rallies began three months ago.

Tensions in Yemen have surged since assailants shot dead 12 protesters in Sanaa on Wednesday and the opposition warned that violence could derail the deal.

Tens of thousands of protests took to the streets across Yemen on Friday, vowing to stay there until Saleh quits his post, which he held since 1978.

“The people want the trial of the murderer,” some anti-government demonstrators shouted.

The GCC deal stipulates that Saleh step down in a month and offers him and his entourage, including relatives who run branches of the security forces, immunity from prosecution.

But a defiant Saleh has publicly insisted on sticking to the constitution in any transfer of power, even though his ruling People’s Congress Party has said it accepts the GCC plan.

Zayani went to Sanaa to formally invite Saleh and his opponents to sign the power transfer deal, state media said ahead of what was expected to be a signing ceremony in Riyadh on Monday.

But he left the Yemeni capital empty-handed after the president refused to sign the deal himself, instead assigning an adviser to do so on his behalf, sources close to both sides said.

And after Zayani informed members of the opposition of Saleh’s position, they also refused to sign the pact unless the veteran leader himself endorsed the agreement. 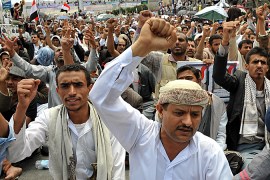 Two days ahead of signing of Gulf peace deal, Sanaa sees one of the largest protests yet demanding president’s ousting. 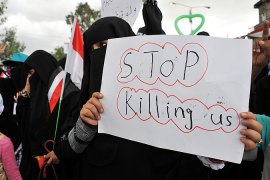 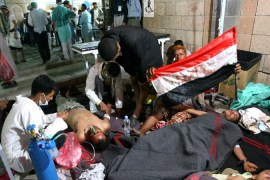 Deaths come as president’s opponents launch campaign against a plan giving him one-month window to resign. 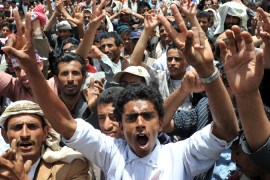