The south Syrian flashpoint town of Deraa has been hit by fresh shelling and heavy gunfire, as residents bury people killed in Friday’s “day of rage” protests against the government, a witness tells Al Jazeera.

The army has been firing at protesters in neighbourhoods in Deraa’s old town and at least four houses in the Karak neighbourhood have been damaged by shelling, according to the witness.

The shelling started at 03:00GMT on Saturday, the witness said.

“We are totally besieged. It is a tragedy. Many houses are levelled by shelling from the army. For the past six days we haven’t seen an ambulance,” the witness said via telephone, while gunfire rang out in the background.

“We are keeping the bodies of the dead in refrigerator trucks, but many bodies are still lying in the streets. Many of the bodies are bloated and are reeking.”

Tanks had been pounding the northern part of Deraa around the Omari Mosque since morning, another witness told Al Jazeera via telephone, the sound of the bombardment audible in the background.

The witness said he had seen 20 tanks enter the city on Saturday morning and while there was no confirmation on casualties, many wounded were being treated by residents in their homes.

A second witness confirmed that tanks as well as armoured personnel carriers had entered Deraa this morning as well as helicopters flying soldiers into the town.

“They are shooting at houses, both the tanks and the soldiers. The most intense fire is at the Omari Mosque,” he said, the sound of gunfire audible over the phone line.

“The bullets are flying straight over my head as we are talking: It’s so close. The humanitarian situation is very bad: There’s no food, no medicine, no electricity. We are collecting rain water to drink,” the second witness said.

Around 300 soldiers had defected and joined the protesters, he said, sharing information on the army’s movements and plans. Some of the defected soldiers had shot at the army in an attempt to defend civilians but they were fast running out of ammunition, he said.

“We have about 60 bodies now in refrigerated lorries. The army is looking for them to bomb them to remove the proof of their crimes,” he said.

Al Jazeera could not independently corroborate the witness accounts.

Al Jazeera’s Rula Amin said that according to sources, “there has been heavy gun fire and they (sources) insist that the tanks were used, heavy guns were used, and when I was talking to them on the phone, you could hear heavy gun fire in the background.

“The son of the Imam was killed when security forces when into his house to look for him; they asked his son on his father’s whereabouts, [and when] the son said he does not know, he was then shot. This is the story we are getting from Deraa.

Our correspondent added that the latest developments reveal how quickly the situation in Deraa was deteriorating.

“In the past few days, Syrian television has been putting people on television saying that they are confessing that they belong to terrorist groups and that they were given money and weapons from different people in Deraa, including the Imam of the Omari mosque,” she said.

“We are told by residents that the imam was always asking for calm, for dialogue, and when I went to Deraa and I met him myself, and he did not say that people should carry guns or should fire at security forces, he was adamant that people have the right to protest, that things need to change in Syria.

“He said something to me I will not forget “for the first time in my life, I feel like a free man”… so people in Deraa are shocked that these accusations are being levelled at the Sheik. They see him as a voice of moderation, and when they see someone like him is being targetted by security forces, they are scared and do not know what is coming next,” our correspondent added.

At least 62 people were killed in nationwide clashes on Friday when tens of thousands of protesters took to the streets, activists said, while authorities said nine members of the security forces were killed by “terrorist groups”.

Pro-democracy protests were held against  Bashar al-Assad’s government in most cities and major towns after Muslim weekly prayers, as on past Fridays for a month.

The protesters pledged new countrywide demonstrations from Sunday at the start of what they called “the week of breaking the siege”.

Demonstrations would take place on Sunday in Deraa, which has been besieged by security forces since Monday along with the Damascus suburb of Douma.

Activists also called for rallies on Monday in Damascus, Tuesday in the northern towns of Baniyas and Jableh, Wednesday in Homs, Talbiseh and in Tall Kalakh on the border with Lebanon, and night vigils on Thursday.

The Committee of the Martyrs of the 15 March Revolution gave a slightly lower overall death toll for Friday, saying 56 people were killed, including 33 in Deraa and 25 in the central province of Homs.

The group said in a statement after the bloodshed that a total of 582 people have been killed since protests erupted on March 15 by security forces firing live rounds and tear gas.

A policeman in Deraa was also among the dead, the military said, adding that dozens of assailants were killed and wounded and 156 arrested.

As the violence raged, the US blocked the assets of Assad’s brother, Maher al-Assad, who commands Syria’s feared Fourth Armoured Division. The US also announced sanctions against several other senior officials and Syria’s intelligence services.

“The United States strongly condemns the Syrian government’s continued use of violence and intimidation against the Syrian people,” the White House said in a statement on Friday.

EU ambassadors in Brussels launched preparations for an embargo on the sale of weapons and equipment that might be used for internal repression and decided to put on the brakes on trade deals with Syria.

The 27-nation bloc will also “urgently consider further appropriate and targeted measures with the aim of achieving an immediate change of policy by the Syrian leadership”, said EU foreign policy chief Catherine Ashton.

In Geneva, the UN Human Rights Council endorsed a US call for an investigative mission on the bloodshed as it voted in favour of a resolution condemning the crackdown.

But Assad’s government reiterated its running ban on demonstrations, despite lifting a decades-old law barring them earlier this month, as the Muslim Brotherhood accused it of “genocide”.

Adnan Mahmud, the Syrian information minister, told AFP the crackdown would continue, saying the “authorities are determined to restore security, stability and peace to the citizens”.

The interior ministry urged Syrians not to join the protests and warned that unauthorised rallies would not be tolerated.

Friday’s protests also rocked the coastal city of Baniyas, where about 10,000 turned out to shout “liberty, solidarity with Deraa” and “down with the regime,” activists said.

Some 15,000 people also protested in the majority Kurdish city of Qamishli and neighbouring towns. 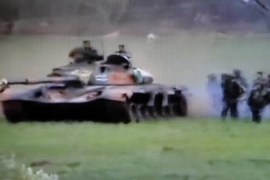 UN human rights body condemns crackdown in Syria and calls for fact-finding mission to Damascus as US imposes sanctions. 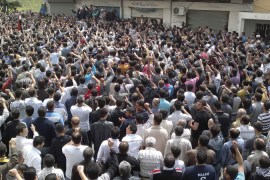 Up to 50 killed by security forces, activists say, as thousands defy government repression to call for freedom in Syria. 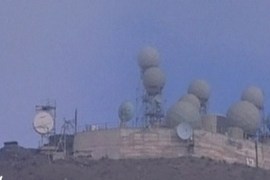 UN nuclear watchdog chief says that a facility damaged in a 2007 Israeli air attack was a “nuclear reactor”.