United Nations chief Ban Ki-moon has called on Cambodia and Thailand to halt fighting along their disputed jungle border as troops exchanged fire for a third day.

At least 10 soldiers have been killed and thousands of civilians forced to flee the area since fighting broke out on Friday, shattering a tense two-month ceasefire.

Suos Sothea, a Cambodian field commander, said the fighting on Sunday started at about 10:00am local time (0300 GMT) and both sides were firing mortars.

“What we can confirm is it involves artillery shell fire,” he said.

A Thai official at the border also confirmed the resumption of hostilities and said “Cambodia opened fire first”.

Ban Ki-moon, the UN secretary-general, called on the neighbours to “exercise maximum restraint” and urged them to resolve the issue through “serious dialogue” rather than military means, according to a spokesperson on Saturday.

He urged the two neighbours to take immediate measures for an effective and verifiable ceasefire.

Six Cambodian troops and four Thai soldiers have been killed since clashes restarted on Friday.

Thai villagers sheltering in makeshift tents in Prasat district, Surin province, told how they raced from their homes in fear when clashes began in the neighbouring border district of Phanom Dong Rak on Friday.

“When a shell fell next to my house, I knew I had to run away,” Somjai Lengtamdee, from Baan Khaotoh village, said.

“I was so worried about my three children. We were separated and it took me all day to locate them all. I can only hope that the war ends soon. I’m so scared,” the 37-year-old told the AFP news agency.

Somdee Suebnisai, a local official for Phanom Dong Rak said there were 16 camps in the area providing refuge to more than 18,000 people and the number was expected to rise to 20,000 by Sunday evening.

On the Cambodian side, the National Committee for Disaster Management told AFP that 12,000 people had been evacuated.

Cambodian villager Neb Oeuth and her six children were among those seeking shelter in a pagoda in Samrong, some 40km east of the unrest.

“Many bombs landed nearby my village and we were afraid. I have no idea when we will be able to return,” she said.

Heavy shelling was clearly audible 20km away from the scene of the fighting on the Cambodian side, according to a photographer for the AFP news agency, as those evacuated from their homes took refuge in schools and temples away from the clash.

Both countries have accused each other of sparking the violence, which is the first serious outbreak of fighting since February, when 10 people were killed in clashes near the 900-year-old Hindu temple Preah Vihear.

Al Jazeera’s Wayne Hay reported from Bangkok that it is extremely difficult to determine who fired first.

“Both sides traditionally blame each other for starting the fighting when it erupts on the disputed border,” he said.

The latest clashes, which saw several hours of fighting on both Friday and Saturday, have taken place near a different group of temples more than 100km away from Preah Vihear.

Thailand has denied claims by its neighbour that it used “heavy guns loaded with poisonous gas” and flew aircraft “deep into Cambodia’s airspace”.

The country recently admitted using controversial Dual Purpose Improved Conventional Munitions during the February fighting but insisted it did not classify them as cluster munitions.

“When there is firing into Thailand, we need to fire back to protect over sovereignty,” Thai Prime Minister Abhisit Vejjajiva said on Sunday in his weekly television programme.

He said Thailand was willing to hold bilateral talks and accused Cambodia of trying to “internationalise” the conflict.

Phnom Penh has asked for outside mediation to help end the standoff, but Thailand opposes third-party intervention.

The two countries agreed in late February to allow Indonesian observers in the area near Preah Vihear, but the Thai military has since said they are not welcome and they have yet to be deployed.

Members of the UN Security Council called for a lasting ceasefire after the last outbreak of violence.

Indonesia, which holds the rotating chairmanship of the Association of Southeast Asian Nations regional bloc, has called for an immediate end to the violence. Vietnam urged “maximum restraint”.

Ties between the neighbours have been strained since Preah Vihear — the most celebrated example of ancient Khmer architecture outside Cambodia’s Angkor — was granted UN World Heritage status in July 2008.

The International Court of Justice ruled in 1962 that the temple belonged to Cambodia, but both countries claim ownership of a 4.6 square km surrounding area. 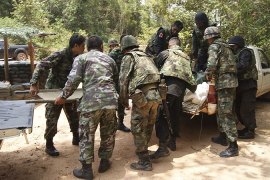 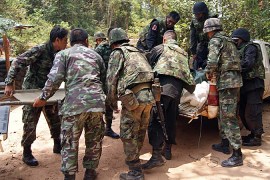 Total number of deaths rises to eight on both sides after several hours of renewed fighting along disputed border. 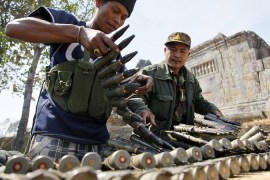 Clashes erupt for a third day around disputed ancient Hindu temple, in spite of a ceasefire. 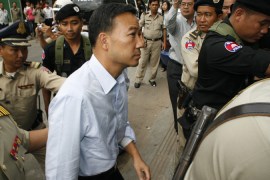 Cambodian officials arrest a Thai MP amongst six others for allegedly crossing the countries’ disputed border.