A fierce battle continued over the course of Tuesday as Libyan government artillery pounded the besieged city of Misurata and further shelling targeted the cities of Zintan and Ajdabiya.

“There was heavy fighting in Tripoli Street and the rebels held their positions. Also, very intense fighting occurred on the eastern side of Misurata on the Nak el Theqeel road. The rebels repelled the attack,” a spokesman who identified himself as Mohamad Abu Shaara told Reuters by telephone.

A spokesman for anti-Gaddafi forces in Zintan, another city in western Libya under attack by Gaddafi’s forces in recent weeks, said there had been fresh bombardment there.

“The pro-Gaddafi forces located north of the town fired mortar rounds from pick-up trucks at Zintan. Fortunately only one person was wounded in the attack,” said the spokesman named Abdulrahman.

“It’s been mostly random firing as the town is perched 750m above sea level and the pro-Gaddafi forces are in the foothills of the mountains.”

Further east, Al Jazeera’s Sue Turton, reporting from the western entrance to Ajdabiya, said that position had come under fire.

“We are not sure if the shelling came from the south, the direction from which this area attacked a few days ago, or a position further along the Brega road, where we know Gaddafi forces are positioned,” she said.

The attacks came as leaders from Libya’s Transitional National Council told European Union officials that Gaddafi’s forces had killed 10,000 people since the uprising began on February 17.

NATO ‘must do more’

Juppe said the 28-nation military alliance should target heavy weapons besieging Misurata, where an increasingly bloody siege by Gaddafi’s troops led rebels to dismiss the AU call for a ceasefire as meaningless.

“NATO must play its role fully. It wanted to take the lead in operations, we accepted that,” Juppe told France Info radio ahead of travelling to Qatar for Wednesday’s Libya contact group meeting on Wednesday.

“It must play its role today which means preventing Gaddafi from using heavy weapons to shell [civilian] populations.”

When asked if NATO was doing enough, Juppe responded: “It’s not enough.”

His sentiments were echoed by William Hague, British foreign minister.

“Nothing indicates, however, that Gaddafi has any intention of disengaging from operations.”

The Red Cross said it was opening a Tripoli office and would send a team to Misurata to help civilians trapped by fighting, but one of Gaddafi’s ministers warned any aid operation involving foreign troops would be seen as a declaration of war.

Meanwhile, Moussa Koussa, Libya’s former foreign minister and spy chief had reportedly arrived in Qatar to share his insights on the workings of Gaddafi’s inner circle late on Tuesday.

Koussa will hold meetings on the fringes of the Libya Contact Group conference being held in Doha as a valuable Gaddafi insider, according to the official, who spoke on condition of anonymity because of the sensitivity of the situation.

Mussa Ibrahim, a spokesperson for the Libyan government, condemned Qatar’s role in the conflict on Tuesday.

“We are very hopeful that the American people and the American government will not buy into the Qatari lies and Qatari schemes,” he said.

“Qatar is hardly a partner of any kind, it’s more of an oil corporation than a true nation.”

Koussa had been staying in a British safehouse until late Monday night, according to Noman Benotman, an ex-member of the Libyan Islamic Fighting Group and relative of Koussa who has been in regular contact with the former foreign minister since he fled Libya.

Although Koussa was provided with legal advice, Benotman said he believed he had “cleared most of the legal hurdles in the UK” surrounding his alleged involvement in the Lockerbie bombing and arming the IRA.

Britain’s Foreign Office confirmed the trip in a statement on Tuesday, saying that Koussa was “travelling today to Doha to meet with the Qatari government and a range of other Libyan representatives” and to discuss the rejected African Union initiative.

Following talks on Monday with the AU delegation in rebel stronghold Benghazi, Transitional Council leader Mustafa Abdel Jalil said: “The African Union initiative does not include the departure of Gaddafi and his sons from the Libyan political scene, therefore it is outdated.”

“Any future proposal that does not include this, we cannot accept,” he said, accusing Gaddafi of bombing, shelling and shooting civilians. 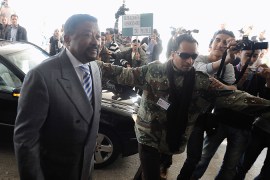 Plan to halt civil war flounders, with fighting raging over Misurata and NATO refusing to suspend its air campaign. 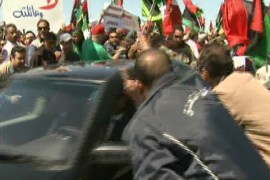 African Union mediators arrive in rebel stronghold in a bid to negotiate a ceasefire between Gaddafi and opposition. 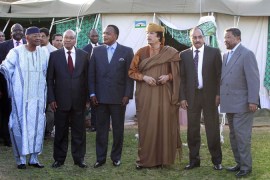