Djibouti’s incumbent president Ismail Omar Guelleh has secured a third term in office after garnering 76 per cent of votes cast in the country’s elections, according to provisional results.

Officials said that with almost all ballots counted, Guelleh’s only challenger, former constitutional council head Mohamed Warsama Ragueh, had about 23 per cent of the vote.

“Tonight the people of Djibouti have chosen, showing their great maturity,” Guelleh said on television just after the results were announced on Saturday.

“They have decided to hand me again the reins of our dear country for the next five years.”

The constitutional council will proclaim the official results in the coming days.

Last year, Guelleh had parliament amend the constitution to allow him to seek another term, sparking an opposition outcry and fuelling unprecedented demonstrations in February.

Thousands of youths took to the streets in the Horn of Africa nation demanding Guelleh, “the dictator”, quit. The rallies led to clashes with the security forces that left two people dead.

US-based Human Rights Watch said earlier this month that Djibouti’s government has “trampled” on the rights that make a vote free and fair, after authorities cracked down on opposition politicians and rallies in the weeks before the election.

Ismael Gedi Hared, a top opposition leader whose party boycotted the poll, argued that the conditions for a free and fair election were not met.

“We had taken part in the 1999 presidential election, and victory was stolen from us. Same for the 2003 parliamentary elections. We have since decided that we will not take part in polls so long as the right conditions are not satisfied,” he told AFP news agency.

Guelleh, 63, has been in power since 1999 and a change in the constitution in 2010 allowed him to run for a third term. He promised on Thursday that he will not seek a fourth term in office if he was elected for another five years.

Djibouti serves as a port for its landlocked neighbour Ethiopia, which accounts for about 70 per cent of traffic. Its economy is chiefly based on the port, strategically located on the busiest shipping routes where the Red Sea joins the Gulf of Aden.

More than half of the 860,000 inhabitants live in the capital.

The ex-French colony hosts the only US military base in Africa and the largest overseas French army base. 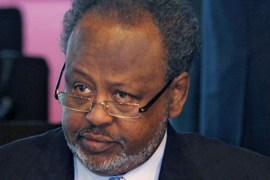