Tens of thousands of Yemenis have taken part in anti-government demonstrations across the country, with pro-government supporters also rallying in several cities.

At least six people have been killed in the demonstrations with one of the deaths taking place after a hand grenade was thrown at anti-government protesters in the city of Taiz on Friday.

Riots also flared overnight in the southern port city of Aden with protesters setting fire to a local government building and security forces killing one demonstrator, local officials said. Seventeen people were also confirmed to have been injured in those clashes.

Protesters across the country are calling for president Ali Abdullah Saleh to step down after 32 years in power, in a movement that has now entered its eighth day in Yemen.

Tens of thousands of demonstrators turned out in the cities of Sanaa, Taiz and Aden for a “Friday of Fury’, as it was termed by protest organisers.

In the capital, Sanaa, the crowd marched towards the presidential palace, chanting anti-government slogans, despite riot police attempting to stop them from doing so.

Demonstrations were also held elsewhere in the city in support of president Saleh. About 10,000 pro-Saleh demonstrators took to the streets in Taiz.

Dozens of pro-democracy protesters, including two suffering gunshot wounds, have been injured in confrontations between pro- and anti-government demonstrators so far.

Protesters’ main grievances include poverty and alleged government corruption. Saleh had earlier promised not to seek re-election in 2013, or to position his son as a successor, but the moves have failed to quell public discontent.

“Although the crowds are smaller in number compared to what happens in different countries, the hostile and fearful mood setting over the last 48 hours may spark more violence,” Hashem Ahelbarra, Al Jazeera’s correspondent in Sanaa, said.

“The fear here is that if events reach a tipping point, armed tribes may raid the capital and this is why people are worried about bloody confrontations.”

Amid the protests, a group of senior clerics in Yemen has called for the formation of a national unity government in order to save the country from chaos.

The influential figures are demanding a transitional unity government that would see the opposition represented in key ministries, followed by elections in six months.

They say the move would place Yemen in the same situation as Egypt and Tunisia, without suffering bloodshed.

Their comments on Thursday came amid fresh clashes between thousands of pro- and anti-government protesters in Sanaa.

“Police are trying to form lines to separate protesters and pro-government supporters – but they’re also attempting to disperse crowds with live ammunition, a sign of the very tense situation in the capital ahead of calls for tomorrow’s ‘Friday of Fury’,” our correspondent said.

Loyalists of the government wielding batons and daggers chased a group of protesters meeting at the city’s university, witnesses said. At least five people were injured in the violence there.

Municipal vehicles ferried sticks and stones to the pro-government side, witnesses among the estimated 6,000-strong crowd said.

“President Ali Abdullah Saleh is meeting daily with powerful tribal chiefs in areas surrounding the capital, telling them he needs their support for this crucial moment,” our correspondent said.

“He has struck a very harsh tone, describing the protesters as ‘anarchists’.

“His entourage is telling media that the situation here is very different to Egypt and Tunisia – and if this country degenerates into violence, it could end up in a very, very difficult situation.

“People here are armed across the country. Tribes have caches of weapons – and the situation here could become much, much worse.”

Ahelbarra said that distrustful protesters have rejected the president’s calls to wait for elections in 2013, saying: “The only way is for us to keep fighting in the streets to bring about the dramatic changes that have taken place in Tunisia and Egypt.” 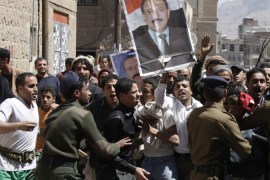 Violence escalates between government supporters and protesters calling for the president’s ouster. 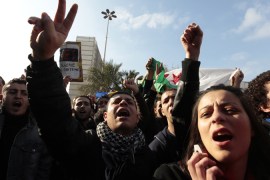 Thousands of people are taking to streets across the region demanding political and social reform. 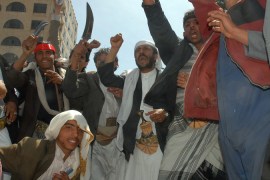 Third day of clashes in the capital amid reports that security forces used tasers and batons again demonstrators.