Shots were fired by soldiers around Pearl roundabout in Manama, the Bahraini capital, a day after police forcibly cleared a protest encampment from the traffic circle.

The circumstances of the shooting after nightfall on Friday were not clear. Officials at the main Salmaniya hospital said at least 66 people were injured, some with gunshot wounds to the head and chest.

Some doctors and medics on emergency medical teams were in tears as they tended to the wounded. X-rays showed bullets still lodged inside victims.

“This is a war,” said Dr. Bassem Deif, an orthopaedic surgeon examining people with bullet-shattered bones.

Protesters described a chaotic scene of tear gas clouds, bullets coming from many directions and people slipping in pools of blood as they sought cover.

Earlier on state TV the crown prince had called for calm, saying it was “time for dialogue, not fighting”.

“The dialogue is always open and the reforms continue,” Sheikh Hamad al-Khalifa said on Bahrain TV.

“We need to call for self-restraint from all sides, the armed forces, security men and citizens,” he said. “I urge you, there should be calm. Now is time for calm.”

Jalal Firooz, of the Wefaq bloc that resigned from parliament on Thursday, said demonstrators had been elsewhere in the city, marking the death of a protester killed earlier this week. The demonstrators then made for the roundabout, where army troops are deployed.

A doctor of Salmaniya hospital told Al Jazeera that the hospital is full of severely injured people after the latest shootings.

“We need help! Our staff is entirely overwhelmed. They are shooting at people’s heads. Not at the legs. People are having their brains blown out,”  a distraught Dr Ghassan said, describing the chaos at the hospital as something close to a war zone.

He said the hospital was running short of blood and appealed for help to get more supplies. Police had no immediate comment.

An Associated Press cameraman saw army units shooting anti-aircraft weapons, fitted on top of armoured personnel carriers, above the protesters in apparent warning shots and attempts to drive them back from security cordons about 200 meters from the roundabout.

Protesters claimed live ammunition was used against the demonstrators.

“People started running in all directions and bullets were flying,” said Ali al-Haji, a 27-year-old bank clerk. “I saw people getting shot in the legs, chest and one man was bleeding from his head.”

Barack Obama, the US president, discussed the situation with King Al Khalifa of Bahrain, asking him to hold those responsible for the violence accountable. He said in a statement that Bahrain must respect the “universal rights'” of its people and embrace `”meaningful reform.”

“I am deeply concerned about reports of violence in Bahrain, Libya and Yemen. The United States condemns the use of violence by governments against peaceful protesters in those countries and wherever else it may occur.

“The United States urges the governments of Bahrain, Libya and Yemen to show restraint in responding to peaceful protests and to respect the rights of their people.”

Riot police using clubs and tear gas broke up a crowd of protesters in the city’s financial district in a pre-dawn swoop on Thursday, killing at least four people and injuring more than 200.

Al Jazeera’s correspondent, who cannot be named for security reasons, reported from Manama on Friday that thousands of people observed the funerals of those killed in the police raid on the protesters’ tents in the city’s Pearl Roundabout area.

Many of those present chanted slogans against Bahrain’s ruling Al Khalifa family. They said they were both grief-stricken and angry at the heavy-handedness of the police, and that they were demanding that the international community take notice of what they call the brutality of the security forces.

Our correspondent reported that Qassem said the government was attempting to create a “sectarian divide” between Sunnis and Shias. He advocated peaceful protests, saying “violence is the way of the government”, and that protesters should not espouse violent actions.

The crowd at the funerals in Sitra were not as large as those seen during previous funerals, our correspondent reported.

He said this was because of a heavy security presence on the streets, with police and army closing off roads across the country.

No security forces personnel were reported to be present at Sitra on Friday, though a helicopter was seen hovering over the funeral procession.

“Many of those who in the past came out [to protests] … are afraid. They’re frightened and they don’t want to turn up at a protest like this because they are fearful for their lives,” he said, citing an incident on February 15 in Manama, when at least one person was killed when police fired on a funeral procession.

Our correspondent further said that while it was “almost impossible” to confirm a figure for those who had gone missing during Thursday’s crackdown, one opposition politician put the number at 70.

Members of the opposition Al Wefaq party have withdrawn from the country’s parliament. The party says MPs will not rejoin if the government continues to disallow protests.

Meanwhile, Bahraini state television showed pictures of a pro-government rally, attended by hundreds, taking place in Manama, despite the ban on public gatherings.

Just hours after Thursday’s deadly police action, the military announced the ban, saying on state TV that it had “key parts” of Manama under its control.

Khalid Al Khalifa, Bahrain’s foreign minister, justified the Pearl roundabout raid as necessary because the demonstrators were “polarising the country” and pushing it to the “brink of the sectarian abyss”.

Speaking after meeting with his Gulf counterparts, he said the violence was “regrettable”.

Two people had died in police firing on protesters prior to Thursday’s deadly police raid. Al Jazeera’s correspondent said that hospitals had been full of injured people after police raid, with the injured including nurses and doctors who had rushed to attend to the wounded.

After several days of holding back, Bahrain’s Sunni Arab rulers unleashed a heavy crackdown, trying to stamp out the first anti-government upheaval to reach the Arab states of the Gulf since the uprisings in Tunisia and Egypt.

During the assault at the Pearl roundabout, police tore down the protesters’ tents, beating men and women inside and blasting some with shotgun sprays of bird-shot.

The interior ministry claims that protesters were carrying swords, knives and other bladed instruments.

The pre-dawn raid was a sign of how deeply the island’s Sunni monarchy  fears the repercussions of a prolonged wave of protests, led by members of the country’s Shia majority but also joined by growing numbers of discontented Sunnis.

Bahrain is a pillar of US military framework in the region: it hosts the US navy’s Fifth Fleet, which the US sees as a critical counterbalance to Iran’s military power.

Bahrain’s rulers and their Sunni Arab allies depict any sign of unrest among their Shia Muslim populations as a move by neighbouring Shia-majority Iran to expand its clout in the region. The army would take every measure necessary to preserve security, the interior ministry said.

The ministry’s statement on Friday did not specify what the arms exports were. It said licenses will not be issued when officials judge that there is a risk that the exports may provoke regional or internal conflicts or be used to facilitate internal repression. It added that it had no evidence that British exports were used to crackdown on protesters in Bahrain. 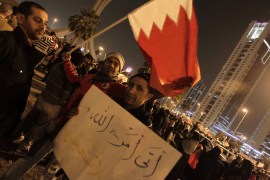 From our headquarters in Doha, we keep you updated on all things in Bahrain. 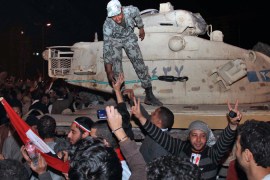 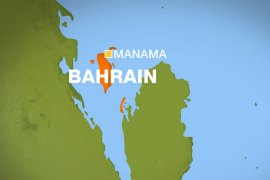 Known as one of the most socially liberal states in the Gulf, the small island nation of Bahrain has faced political unrest in recent years. With a capital in Manama, the country is a chain of around 30 islands with a territory of 717 square kilometers. It is a member of the Gulf Cooperation Council […] 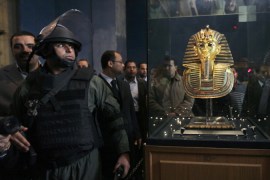 Learning from past revolutions?

Egyptians are treading a well-worn historical path, walked in eastern Europe, Iran, Cuba and beyond.