The Bahrain capital of Manama was rocked by sporadic clashes, hours after riot police attacked a makeshift encampment of pro-reform protesters in the centre of the city, killing at least six and injuring dozens of others.

An Al Jazeera correspondent, who cannot be named for security reasons, said on Thursday that “clashes were no longer limited to one place…they are now spread out in different parts of the city”. He said that the hospitals are full of injured people after last night’s police raid on the pro-reform demonstrators.

“Some of them are severely injured with gunshots. Patients include doctors and emergency personnel who were overrun by the police while trying to attend to the wounded.”

Another Al Jazeera online producer said that booms could be heard from different parts of the city, suggesting that “tear-gas is being used to disperse the protesters in several neighbourhoods”.

Latest reports, however, indicated that a tense calm had descended on the capital with troops patroling the streets. There were also reports of dozens of armoured vehicles moving towards the Pearl Roundabout, the protest site that was raided by the riot police.

Heavily-armed police stormed the traffic circle while the protesters camping overnight were asleep.

Speaking to Al Jazeera from Salmaniya hospital, the main medical facility in Manama, Maryama Alkawaka of Bahrain Centre for Human Rights, said that she saw dozens of injured demonstrators being wheeled into emergency rooms early on Thursday morning.

Nazea Saeed, a journalist with Radio Monte Carlo, said hundreds of people had gathered at the hospital.

Speaking to Al Jazeera from the scene, she said the crowd is chanting: “Down with Al-Khalifa”, in reference to the country’s ruling family.

“People are also chanting that the blood of the victims will not be in vain,” she added.

“People were attacked while they were sleeping. There was no warning,” Saeed said. “And when they ran, the police attacked them from the direction they fled to.”

Our correspondent said that even doctors, who had set up a medical tent near the protest site, were assaulted. One medical consultant was severely beaten and he was released because the police said “they didnt want him to die here”.

“Whoever took the decision to attack the protest was aiming to kill,” Abdul Jalil Khalil, a parliamentarian with the Wefaq bloc said. “This is real terrorism.”

In a statement, the Bahraini interior ministry said that “security forces evacuated the area of Pearl Roundabout from protesters, after trying all opportunities for dialogue with them, in which some positively responded and left quietly.”

Brigadier Tariq Hassan Al Hassan, a spokesman “called upon people to follow the constitution and the law while expressing their freedom of expression.”

An Al Jazeera correspondent in the Pearl Roundabout area, said that he heard loud booms in the square, and felt a strong tear gas in the air.

“The police came in a quick move, using tear gas. It looks like they are trying to move the protesters away from the square, but this is no small protest,” he said.

“Authorities are acting because they see clearly how big this is getting.”

Matar Ibrahim, an opposition member of the parliament, said that women and children were among the injured.

Speaking to Al Jazeera from Salmaniya hospital, he also said that at least that many of the wounded were in critical condition.

Our online producer in Manama said police helicopters were circling above the area.

“[Thursday] morning’s call to prayer is struggling to become louder than the choppers circling overhead. The roads are nearly empty because of the police blockades, though just a little while ago, vehicles were travelling freely to and from the Lulu area,” he said.

The F1 Bahrain Grand Prix scheduled for three weeks time is in serious doubt. The track warm-up event for this weekend, the Gp2 Asia series race, has been canceled due to the protests.

The circuit had no medical workers available after they were all called to work at hospitals.

Pro-reform protesters have taken to the streets of Manama since Monday, apparently inspired by the uprisings in Tunisia and Egypt.

Two people had died in police firing on the protesters, prior to Thursday’s deadly police raid. The deaths prompted a rare apology from the king, who in a television appearance expressed his condolences for “the deaths of two of our dear sons”, and said a committee would investigate the killings.

“We will ask legislators to look into this issue and suggest needed laws to resolve it,” he said, adding that peaceful protests were legal,” Sheikh Hamad bin Isa Al-Khalifa said.

But Alkwaka, the human rights activist, said that the fresh crackdown on peaceful protesters cast a doubt on the king’s pledge for investigation and calm.

“People are now asking: is this the investigation that the king promised?” she asked.

Ruled and dominated by a Sunni minority, Bahrain has a Shia majority population. Tension between the two communities has been festering for years.

To balance the population, the government is accused of granting thousands of citizenships to Sunni workers. Saeed said this continues to be a source of deep tension.

Earlier, an Al Jazeera correspondent said pro-reform protesters initially demanded a constitutional monarchy. But as demonstrations gathered momentum, and as police crackdown on protests, many upped the ante on the ruling family, calling for its ouster.

A key ally of the US in the region, Bahrain houses a major military base for Washington. 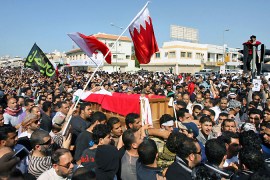 Offering a rare apology, king says deaths will be probed as US expresses concern over the unrest shaking its close ally. 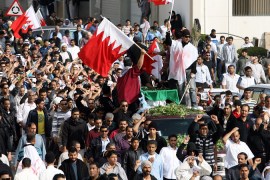 Anti-government protests continue in tiny kingdom, despite apology by king for the deaths of two demonstrators.