Clashes have broken out between supporters of the Iranian government and apparent members of the opposition at the funeral for a student killed in recent protests, state television has reported.

“Students and people participating in the funeral of martyr Sane’e Zhale in Tehran Fine Arts University are clashing with a few apparently from the sedition movement,” the website of broadcaster Irib said on Wednesday.

Zhaleh was shot dead during an opposition rally in Tehran, the capital, on Monday, a killing the government blamed on anti-government protesters. But opposition groups say it was carried out by security forces.

The violence broke out during the funeral procession from the art faculty at Tehran university, where Zhaleh was a student, Irib said.

The broadcaster added that government backers were chanting “Death to Monafeghin”, a reference to an outlawed opposition group, which “forced them [opposition supporters] out of the scene”.

However, Iranian bloggers reported that loyalist forces were brought into the campus who then took over the faculty, while riot police were deployed across the city.

Others have also written on social networking site Twitter that some roads in the city have been blocked and that thousands of people were out on the streets of Tehran, demonstrating both for and against the government.

There are also reports that authorities have blocked foreign media from working.

Government supporters have insisted that Zhaleh was a member of the Basij militia – a volunteer force connected to the elite Revolutionary Guards, while opposition groups say he came from their ranks.

Rahesabz.net, an opposition website, said Zhaleh was “pro-Mousavi and a member of the Green Movement,” referring to the group led by Mir Hossein Mousavi, which refuses to acknowledge the presidency of Mahmoud Ahmadinejad.

“His family was under pressure to say he is Basiji and pro-government,” the website said.

Government supporters have called a rally in Tehran on Friday to express “hatred” against the opposition movement.

“The noble people of Tehran will take to Enghelab Square after Friday prayers with their solid and informed presence,” the Islamic Propagation Co-ordination Council said on Wednesday.

It said those joining the rally will “scream out their hatred, wrath and disgust against the savage crimes and evil movements of sedition leaders, their Monafeghin [hypocrites] and their monarchist allies.”

“The heads of seditions are the people who should be punished for their criminal acts and God willing actions in this regard are being taken,” Mohseni Ejeie said, according to Fars news agency.

Meanwhile, Mousavi and Karroubi both made statements online on Wednesday criticising authorities and calling for further protests against the government.

Karroubi, in a statement posted on his website Sahamnews.org, said he was “ready to pay any price” in his fight.

“I am warning that before it is too late, take out the buds from your ears and listen to the voice of the people. Forcing violence and opposing peoples’ wishes will last only for a certain time,” he said.

In a separate statement on his own website Kaleme.com, Mousavi praised protesters for turning out in Monday’s rally in Tehran.

“The glorious rally on 25th Bahman [February 14] is a great achievement for the great people of a great nation and for the Green Movement,” he said.

The comments by Mousavi and Karroubi, who have been under house arrest for the last week, come a day after Iranian politicians called for their execution.

“Mousavi and Karroubi should be executed! Death to Mousavi, Karroubi and Khatami!” ministers shouted in parliament.

They also accused the United States, Britain and Israel for orchestrating the protests through the opposition leaders.

Two people, including Zhaleh, were killed in the capital on Monday and dozens wounded, after riot police fired tear gas and paintballs at demonstrators.

Nine security forces were injured, state television said, while between 150 and 1,500 people were detained, according to official media and human rights groups.

The Students Committee for the Defence of Political Prisoners reports that more than 600 family members of those arrested in Monday protests in Tehran arrived outside Evin prison, looking for information on those detained by Iranian security forces.

Saham news reports that the home of Karroubi’s son, Hossein, has been raided by 20 members of the security forces.

There are also reports on Twitter that Khamenei’s web site has been hacked.

In a statement issued late on Tuesday, president Ahmadinejad said that the “enemies” who planned the anti-government protests in Tehran will fail to achieve their goals.

“It is evident and clear that the Iranian nation has enemies because it is a country which wants to shine and achieve its peak and wants to change relations [between countries] in the world,” he said in a live  interview on state television. 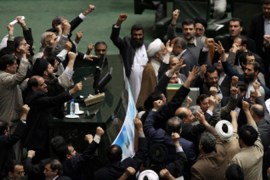 MPs call for execution of opposition leaders who called for Monday’s marches in several cities that turned deadly.