Silvio Berlusconi, the Italian prime minister, has narrowly survived a no-confidence motion that left his struggling centre-right government clinging to power by a handful of votes.

The result reinforced Berlusconi’s reputation as one of the great survivors of Italian politics but left him badly weakened, without the numbers in parliament to ensure stability at a time of big economic challenges and a menacing euro zone debt crisis.

Here are some key dates that have marked his political life:

December 1994: Umberto Bossi, the Northern League party leader and currently one of Berlusconi’s few close allies, pulls out of the coalition government following rows with the prime minister and forces Berlusconi to resign.

May 2001: Berlusconi bounces back with an election win after a US-style campaign in which he signs a “Contract with Italians” live on television. He goes on to serve the longest stint as premier in Italian post-war history.

July 2003: Berlusconi causes international shockwaves after comments in the European Parliament in which he mockingly invites a German member of parliament who criticised him to play a concentration camp guard in a new Italian film.

January 2007: Berlusconi’s wife demands a public apology after he flirts with one of his deputies, telling her: “I’d go anywhere with you, even to a desert island. If I weren’t already married, I would marry you straight away.”

April 2008: Berlusconi wins his third election after the sudden collapse of Prodi’s government with his new People of Freedom party amid stagnation in the Italian economy and a garbage crisis in Naples.

May 2009: Berlusconi’s wife says she can no longer be with a man who “cavorts with minors” after scandalous allegations on the prime minister’s involvement with a young Neapolitan model who calls him “Daddy”.

November 2010: Gianfranco Fini, the speaker of parliament, breaks up his long-term alliance with Berlusconi after a series of angry disputes, pulling his four ministers out of the government and triggering the December 14 confidence vote.

December 2010: Berlusconi narrowly survives the no-confidence motion of Gianfranco Fini with his centre-right government clinging to power by only a handful of votes.

February 2011: Berlusconi is ordered by an Italian court to stand trial on charges of paying for sex with an under-age prostitute, Karima El Mahroug, and then using his power to cover it up. The process is due to start on April 6. Both Berlusconi and El Mahroug have denied they had sex. 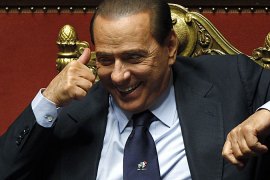 Silvio Berlusconi wins confidence vote in the senate and lower house, leaving him with a razor-thin majority. 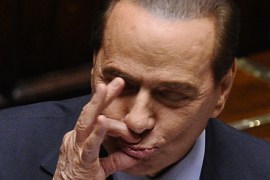 Silvio Berlusconi fights for his political life as lawmakers begin voting on a confidence motion. 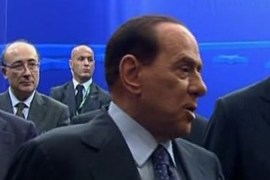 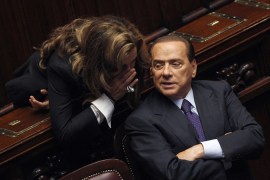