Egypt’s state and pro-government media have abruptly changed their tune after the ouster of Hosni Mubarak, from being faithful government mouthpieces to celebrating the revolution.

On Saturday, state TV issued a statement carried by Egypt’s Middle East News Agency, “congratulating the Egyptian people for their pure great revolution, lead by the best of the Egyptian youth”.

“Egyptian TV will be honest in carrying its message,” the statement said. “Egyptian TV is owned by the people of Egypt and will be in their service.”

During the 18-day uprising, state TV and pro-Mubarak newspapers portrayed the hundreds of thousands of protesters as a minority of troublemakers.

But a day after Mubarak stepped down, the frontpage of the previously pro-Mubarak newspaper Al-Ahram proclaimed “The people ousted the regime”.

A state TV journalist, reporting from outside Mubarak’s Cairo palace where thousands had gathered after his ouster, said that “at these moments, Egyptians are breathing freedom”.

And an editorial by the state-run daily Al-Gomhouria called for greater transparency, complaining that “the sharks of the old regime sucked the life from Egypt”.

During the uprising, some pro-government media were targeted by the protesters.

Some of the largest and most violent protests took place in front of the ministry of information, from which state TV broadcasts. At some point, riot police clashed with protesters trying to take over the building.

Many accused Anas el-Fekky, the information minister, of orchestrating a heavy media campaign against protesters by accusing them of sabotaging Egypt.

Dozens of journalists, including from Al Jazeera, were detained, injured and threatened while covering the uprising.

The Egyptian government closed Al Jazeera’s bureau in Cairo, saying its coverage was biased against the government and agitating protesters. 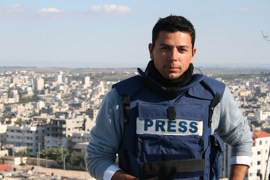 Ayman Mohyeldin on his detention 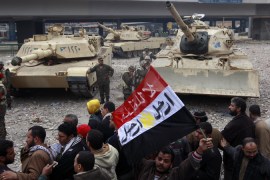 Hazards of reporting from Egypt

Al Jazeera’s online producer recalls the many perils he faced while reporting from the country in upheaval.