Hosni Mubarak has resigned as Egypt’s president and transferred his powers to the Supreme Council of the Armed Forces.

General Omar Suleiman, vice-president and former intelligence chief, is among the key retired or serving military officers on the council.

Here are brief profiles of some of the men that make up the council.

Field Marshal Tantawi, Egypt’s defence minister, was appointed deputy prime minister after the government was sacked on January 29 and is now heading the council.

He became minister of defence in 1991 and is the commander-in-chief of the Egyptian Armed Forces.

Some reports suggest that Tantawi, 75, has been seen as a possible contender for the Egyptian presidency.

During the mass protests which forced Mubarak to step down, Tantawi famously became the first member of government to visit Tahrir Square on February 4. He is said to have engaged military officers as well as protesters during his brief visit.

In diplomatic cables released by the Wikileaks website, US officials have characterised Tantawi as someone who was “reluctant to change” and uncomfortable with the US focus on fighting terrorism.

Tantawi served in three wars against Israel, starting with the 1956 Suez Crisis and the 1967 and 1973 Middle East wars.

He also served as military attaché to Pakistan and commander of Egypt’s Presidential Guard.

Lieutenant-General Sami Anan is the armed forces’ chief of staff, and the commander of 468,000 troops. He is seen as having a crucial role in co-ordinating interim arrangements for the government in Egypt.

Anan, 63, was in Washington when the uprising began and he cut short his visit to return. It was reported that the United States was pushing Anan for a key mediating role, though it was speculated that he was far too close to Mubarak to retain any role in a new government.

He is trained in the former Soviet Union and has studied at France’s elite interservice war college as well as in Egypt.

On 1 July 2007 he became chief of the operations department and towards the end of the year he was appointed Air Force Chief of Staff.

Within three months he replaced Magdy Galal Sharawi as air force chief, taking up his post on 20 March 2008.

The 59-year-old has held numerous command posts and served as a liaison officer to the United States.

Naval Forces Commander in Chief Vice Admiral Mohab Mohammed Hussein Mamish, 63, has trained in the US, the UK and the UAE.

Lieutenant General Abd El Aziz Seif-Eldeen, 62, is commander of The Egyptian Air Defence Forces, He joined the military college in 1968 and graduated in 1970. 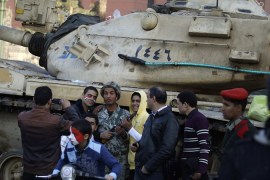 People power has spoken in the biggest Arab nation just four weeks after Tunisians toppled their own ageing ruler. 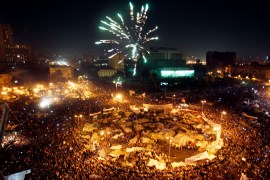 Millions celebrate as Egyptian president cedes power to the army, ushering in a new era of optimism in the Arab world.

World reacts as Mubarak steps down

Global leaders hail “historic change” and “victory” in Egypt, but Obama warns of difficult days ahead.