Ahmed Mohammed Mahmoud was like any other journalist, his wife Enas Abdel-Alim, says. When he saw something important happening, he rushed to cover it.

And that’s just what he did on January 29, when he heard a commotion outside his office in central Cairo’s Lazoghly square, just next door to the country’s interior ministry.

Standing at his office window on Majlis al Shaab [Parliament] Street, Mahmoud quickly took out his mobile phone and started recording, a simple move that ultimately cost him his life.

Before Mahmoud even had a chance to react, she said, a sniper shot him.

The bullet hit his right eye and lodged in his brain. Mahmoud then fell into a pool of his own blood, according to a report in Al-Ahram, Egypt’s largest state-owned newspaper.

His co-workers quickly called an ambulance for help, and when it arrived, medical workers asked how Mahmoud had been wounded.

When they said that he had been shot, the ambulance refused to take him, Al-Ahram reported.

Mahmoud’s colleagues then rushed him in their own car to Egypt’s largest public hospital, Qasr Al-Aini.

By then, he’d fallen into a coma, which lasted for six days. The bleeding in his brain never stopped, and he died on Thursday, becoming the first journalist killed during Egypt’s revolution.

Mahmoud, 39, worked as a journalist for the state-run Al Tawuun newspaper, which is distributed by the Al-Ahram publishing house.

According to Al-Ahram, he was shot as Habib El Adly, the former Egyptian interior minister, was exiting the ministry building.

He came from a family of prominent publishers and his wife, who is also a journalist, writes about foreign affairs for the Al-Masaiya [Evening] newspaper.

He leaves behind a ten-year-old daughter, who does not yet know that her father was killed.

She wants the Egyptian government and human rights organisations to investigate the circumstances of her husband’s killing and to prosecute the person responsible.

“I want to know who did this to my husband,” Abdel-Alim told Al Jazeera.

“I want the authorities, especially in the interior ministry, to investigate and to punish the man who did this to my husband in cold blood. He destroyed our family.”

On Monday, a group of Egyptian journalists will hold a prayer service for him at the journalists’ syndicate office before marching to Tahrir Square.

The journalists, including Karem Yahia, an Ahram writer, have also condemned a general crackdown on the media by the Mubarak regime.

“Many members of the media, both local and foreign, were attacked so they could be silenced,” the journalists said in an Arabic-language statement released to the media.

“The propaganda tool of the dictatorship regime is waging psychological warfare on the people, which is no less fierce than the tool of repression and terrorism that results in the killing and jailing of people.”

Yahia said he only heard of Mahmoud’s shooting on the day his colleague died, adding he believed there was a concerted effort by the government to conceal what happened.

“Hospitals won’t release the number of people killed or injured, or their names. What does that tell you?” he told Al Jazeera.

“Even the journalists can’t find out. This shows that no one in Egypt really knows how many people were killed at the hands of the security services and the gangs of the National Democratic Party.”

Abdel-Alim said she has no doubt why her husband was killed.

“The perpetrator did this to him because he was filming what was happening. They didn’t want us to cover the massacre that happened that day,” she said.

“Ahmed wasn’t the only one who died that day. Snipers killed other people. They were everywhere.”

Abdel-Alim met her husband 11 years ago during a reporting trip to Syria. She said they bonded over their mutual passion for journalism.

“We fell in love very quickly,” she said.

Abdel-Alim said her husband was devoted to both his family and his craft.

“We had so much in common. He would always say that we were one soul in two bodies. The happiest days of my life were with him,” she said. “Now my life is over.” 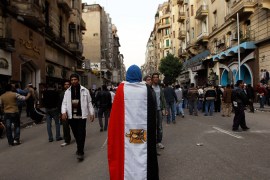 With Egypt, where is the UN?

With protests against Egypt’s president showing no sign of abating, many are petitioning the UN to step in. 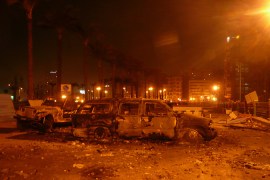 Thousands of protesters remained angry with Mubarak government on Saturday , but it was unclear if anyone was listening.